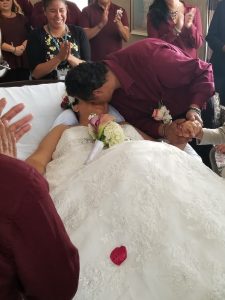 Cecelia Mendez and her longtime partner, Luis, share a kiss during their July 17 wedding ceremony at Seasons Hospice Inpatient Center in Naperville. (Photos from Seasons)

Seasons Hospice Inpatient Center in Naperville was the site of the wedding for Cecelia Mendez, who has been fighting cancer since March, and her longtime partner, Luis.

Because of the severity of her disease, Mendez, 46, who has been fighting cancer since March, has been in and out of the hospital. On July 15, she arrived at the Naperville hospice after deciding she wanted to live out the rest of her days in her home, pain-free.

To help manage her symptoms and get comfortable before going home, Mendez was staying at the inpatient center for a few days.

When signing her into the hospice, the staff asked Mendez what her last wishes were, and one of them was to marry her partner of 20 years, Luis. They have two children, a 17-year-old daughter, Cason; and a 7-year-old son, Estaban.

“We know time is of the essence so we quickly made it happen,” said April Dovorany, manager of public relations for Seasons Healthcare Management. 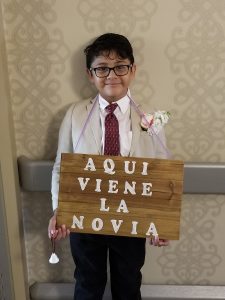 The couple’s son, Estaban, holds a sign which translates to “Here Comes the Bride.”

Our team member Kathy Macpherson worked with Catherine Simms Bridal in Aurora. The owner, Karen, donated a stunning wedding dress within just two days of contacting her. The team took care of the rest of the details and plans were in place for the wedding to happen.”

On the afternoon of July 17, Cecelia and Luis were married at the Naperville Hospice Inpatient Center, with their two children at their side. Nearly a dozen other family members stood by in support of the union.