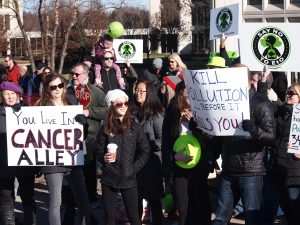 Kevin Owens wore a gas mask as he stood along Spring Avenue in Oak Brook, protesting the emission of ethylene oxide, a known carcinogen, in the Southwest Suburbs.

Just yards away from the offices of Sterigenics, a company that sterilizes medical equipment and other items at two Willowbrook facilities, Owens said he was at Saturday’s protest because of his family.

“We have power as a community,” Owens said, noting that more than 8,000 people have joined the anti-Sterigenics movement through social media. “… We are not going to stop until they are shut down.”

Both the National Air Toxics Assessment and the Agency for Toxic Substances and Disease Registry identified ethylene oxide, known to be a cancer-causing agent, in the air in the Willowbrook area and an issue that needs to be addressed.

Dozens of concerned residents, many holding signs urging the company’s Willowbrook facilities be shut down, lined the east side of Spring near Oakbrook Center for Saturday’s protest.

Don Raymond of Burr Ridge held a sign saying, “Won’t you not be our neighbor?”

“I live in the radius,” Raymond said, referring to the footprint of emissions from the plant. 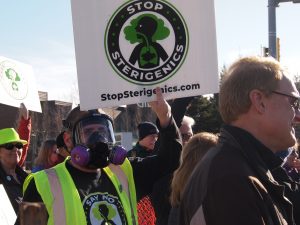 Kevin Owens of Willowbrook protests Saturday outside the Sterigenics offices in Oak Brook. Three members of his family have had breast cancer. Ethylene oxide, emitted from the Sterigenics sterilization facilities in Willowbrook, is a known cancer-causing agent, according to the U.S. Environmental Protection Agency. (Photo by Kevin Beese/Chronicle Media)

Raymond, who has lived in Burr Ridge for 10 years, said that longer-time residents on his block have brain tumors.

“It’s ridiculous. We are at the point that they should shut it down and figure out what to do from there,” Raymond said.

The Burr Ridge resident said he is concerned about going to Target and other Willowbrook businesses near Sterigenics.

He felt that Target and other businesses near Sterigenics may begin to lose customers if action isn’t taken against the sterilization company.

Raymond said it is time for local elected officials to act on the issue.

“We are paying for our elected officials — people are supposed to act — to sit on their hand,” the Burr Ridge resident said.

Burr Ridge Trustee Guy Franzese said there have been “a ton of complaints” in the community about emissions from Sterigenics.

“A lot of people (from Burr Ridge) go to the Target and other Willowbrook businesses and Sterigenics sits right there,” Franzese said.

At one point, protesters broke into song, singing “All we are saying is we want clean air” to the tune of John Lennon’s “Give Peace a Chance.” 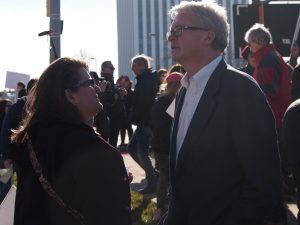 The Farrises of Indian Head Park made the Sterigenics protest a family event with Demi, 5, and Alec, 6, holding signs and standing alongside dad, Jordan, and mom, Joanna.

“We came because we thought we could help our city. We are concerned about our community,” Jordan Farris said.

He said they came because of their concern for fellow Indian Head Park residents, but also everyone in the area affected by the company’s emissions. He noted Willowbrook police officers are stationed right across the street from the company’s plants.

Farris said there was no indication of any issues with the company’s emissions when they moved in five years ago.

“Our kids are breathing that air,” Farris said. “We had no idea of these concerns when we came here. How could Sterigenics not report that? … It is shameful.”

“We love our community,” Joanna Farris said. “There are so many amazing and wonderful families.”

Neringa Zymancius, a leader of the Stop Sterigenics citizens group, said lawmakers are dragging their feet talking about the potency of ethylene oxide.

“The debate is how long it will take for the toxic air to kill us,” Zymancius said. “Will we die soon or in 20 years? Are you kidding me?”

Zymancius said leading protests like Saturday’s effort are foreign to her, noting that she was running kids to a Christmas pageant and Lithuanian school before heading to the protest. 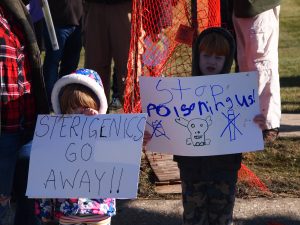 “We are p—ed off. Our voice is growing,” Zymancius said. “We are not going away. We want Sterigenics out of our town.”

State Sen. John Curran (R-Willowbrook) said he was impressed with the strong turnout at the protest.

“It is so important for you to give us input,” Curran told the protesters. “Make your voice heard.”

The state senator said residents’ protests will continue to send a message.

“I will continue to fight for clean air,” Curran said. “It is a right not being given to my neighborhood.”

State House Republican Leader Jim Durkin of Western Springs said he is weighing options that can be taken at the state level, including legislation.

“There are different types of responses we need to look at,” Durkin said.

He said the incoming administration is aware of the issues with Sterigenics and Gov.-elect J.B. Pritzker wants to talk with him personally about the air-quality issues in the area.