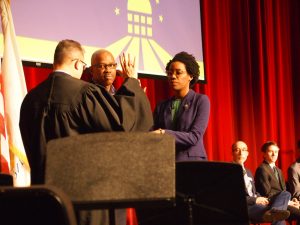 Lexi Richter is all about Lauren Underwood so her dad surprised the 9-year-old by taking her to the 14th District congresswoman’s ceremonial swearing-in.

“My daughter, Lexi, is very excited by Lauren Underwood,” Jim Richter of Oswego said, adding that he and his daughter got a picture with Underwood when the then-candidate was in Oswego this summer.

As a baby Lexi had health issues, Jim Richter said, so Underwood’s fight for health coverage for people with pre-existing conditions resonates with the Oswego girl.

“She is very aware of the representative’s health coverage concerns,” he said.

The Richters were able to meet Underwood again Saturday (Jan. 12) after the ceremonial swearing-in at Neuqua Valley High School in Naperville, the congresswoman’s alma mater.

Underwood, a four-year member of the school’s choir, mouthed the words to the school’s “Alma Mater” song as the current choir performed it.

The Naperville resident told people in the school’s nearly packed auditorium that she is thrilled to be representing the 14th District “as a nurse, as a public servant and a member of Congress.”

She said her time at Neuqua Valley more than 15 years ago shaped her passion her service.

“It prepared me for the journey and the chapters that lie ahead,” Underwood said. “I can remember standing in this very room for various musical performances, different ceremonies and achievement recognitions and being a young adult, teenager, with so many hopes and dreams. I had no idea if they could even come true but I knew we had to serve and had to give back.” 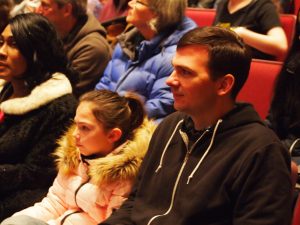 Underwood remembers making the Girl Scout pledge “to help people at all times” at 5 years old and at various times during her time in Scouting, but admits she truly didn’t know what that pledge meant.

“But life sends you tests sometimes,” she said, “and oftentimes that test is whether to engage or not. Do you act, do you heed the call and do what’s right or do you retreat? If it’s inconvenient, if the outcome is uncertain, do you act?”

She said it was that lesson that she learned at Neuqua, in Naperville and in the 14th District that gave her the courage to act and do the right thing.

“For me, that call came when it was about health care,” Underwood said.

She said she recently met an Oswego mom who told her that she was forced to decide between having her house warm this winter and paying for health coverage for her and her son, both of whom have pre-existing conditions.

“She said there was a chill in her house,” Underwood said. “People should not have to choose between heat and health coverage.”

Underwood said she wants to hear from people in the district because she is there to represent residents.

giving out her address. She also encouraged residents to write, call and email to share their view with her and her staff. 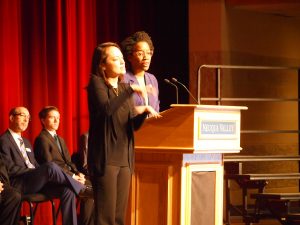 She also promised to hold regular town hall meetings to get residents’ input on the issues they want her to address in the nation’s capital.

“Each morning, I wake up eager to do the things I get to do,” Underwood said. “For me, that is I get to advocate on your behalf.”

Underwood, the youngest black congresswoman in the country, showed a passion for service during her time at Neuqua, according to John Glimco, former assistant principal at Neuqua Valley.

“She showed she was a leader then,” Glimco said, noting the Underwood would find a niche of students not being served and work with him to create programs for those individuals.

“If there were gaps in programs, she would work to address them,” Glimco said.