Moon Khan had a simple message with a familiar ring to it for President Donald Trump.

“Mr. Trump, tear down this wall of hatred,” Khan said, tweaking the words President Ronald Reagan uttered to Soviet Union leader Mikhail Gorbachev in 1987 regarding the Berlin Wall in Germany. 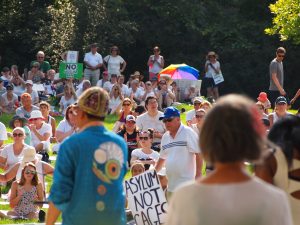 Moon Khan talks to participants in the “Families Belong Together” protest Saturday (June 30) in Downers Grove’s Fishel Park. The protest, one of 21 in Illinois, drew attention to children being separated from their parents at the U.S. southern border. (Photo by Kevin Beese/ Chronicle Media)

Khan was one of the speakers at the Saturday (June 30) “Families Belong Together” protest at Fishel Park in Downers Grove.

The event, one of 21 such protests in Illinois that day, was held to draw attention to the children being separated from parents at the U.S. border with Mexico when the parents come forth seeking asylum.

Speaking before hundreds of area residents, Khan said, “We are one nation. We are not one color.”

He said people in the Trump administration continue to act the way they do, fearful that “America is not going to stay white.”

Khan, the first Asian-American to serve as a York Township trustee, told the crowd that he had a confession to make.

He said we are a country of immigrants, something that we should embrace. 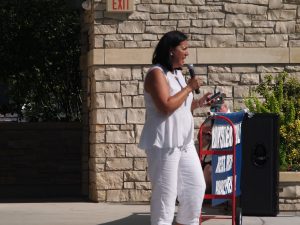 “Immigration is in our DNA. It’s in our history, our origins,” Khan said. “All immigrants deserve respect. To have our borders promote the criminalization of people is wrong. We have to end this discrimination.”

“Five months after Pearl Harbor, there were notices on utility poles in our area requiring Japanese internment,” Arimura said. “There was not one dissent. We were politically weak, hopeless people. I asked my father about it and he said, ‘It cannot be helped.’”

The 90-year-old Naperville resident said that despite being interned, all 11 members of her family were kept together.

“So, it is possible,” Arimura said. “Separating people is shameful.” 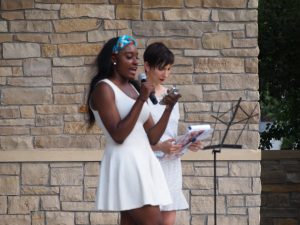 Prevail Bonga reads prepared remarks from her phone during the protest Saturday (June 30). Bonga, the daughter of immigrants from the Congo, questioned, “How has it become acceptable to separate children from their parents?” (Photo by Kevin Beese/ Chronicle Media)

“We have had the most lies and the biggest lies of any politician in my lifetime,” Chapa LaVia said.

She also blasted Illinois Republicans for not denouncing actions and false statements from the Trump administration.

“It is shameful that we have a Republican governor and I have colleagues in the state legislature who have been silent,” Chapa LaVia said. “Those who campaigned on Christian values have turned a blind eye to the endless problems.”

Chapa LaVia, the first Latina outside of Cook County elected to a state representative post, closed her remarks by asking those in attendance to remember “Love trumps hate.”

Prevail Bonga, the daughter of two immigrants from the Democratic Republic of the Congo, said she doesn’t understand why our country does not want to help people being oppressed in other countries.

“Why wouldn’t we want to help other people who are strapped?” Bonga asked. “How has it become acceptable to separate children from their parents?” 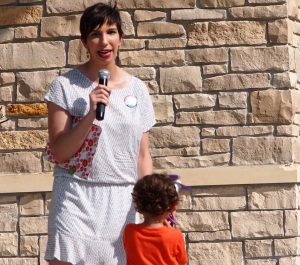 Anne Stava-Murray, organizer of the DuPage “Families Belong Together” protest and Democratic candidate for state representative in District 81, is interrupted during her comments by her son on Saturday (June 30). Stava-Murray said that in 2016 she was too busy with a new baby to be politically active and felt “nothing is going to happen.” She said she has since been horrified by the sights and sounds of children being separated from their parents. (Photo by Kevin Beese/ Chronicle Media)

One of the organizers of the Downers Grove March for Our Lives held back in March, Bonga said that residents need to be vigilant in keeping pressure on the Trump administration to keep families together.

Meggie Hernandez noted that too often when we think of racism, we think of the South. However, she noted Illinois has a notorious past as well.

She said her grandparents dealt with racism firsthand.

“When they tried to buy a house in Lombard in 1961, the deed said, ‘For Caucasians only.’” Hernandez said.

She noted that to this day, her grandfather shies away from going out in public.

“My grandfather is afraid because of the way he looks and his accent to be in public spaces,” Hernandez said.