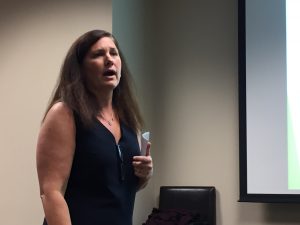 Illinois innovators are creating companies that are changing the world while making a profit at the same time, said a professor from Northern Illinois University’s Social Entrepreneurship program.

Christine Mooney, NIU professor of entrepreneurship, spoke in Chicago Sept. 20 about the growth of  “social enterprise” companies in Illinois. These companies are both “doing good for the world and doing well for the bottom line,” she said, at a talk for Leadership Illinois, a women’s empowerment and education group.

“The idea of social good has been around for a long time, but recently there’s been a perfect storm that’s happening that we’ve seen this growth of the social enterprise,” Mooney said.

“One of the things is these massive problems are getting worse. Governments can’t solve them because they’re constrained by their structure and corruption, particularly globally,” she said.

But luckily a new breed of entrepreneurs is tackling these societal ills.

“Here’s the way the social entrepreneur looks at problems: The bigger the problem, the bigger the opportunity,” Mooney said.

Tech-savvy Millennials, a sense of global connection, early retirement of successful  business people and new hybrid incorporation categories have also moved social enterprise into the mainstream. Tom’s Shoes and Kiva, an international micro-loan business, were early examples of companies that can make money while making a social impact, she said.

“This is the tipping point, we’ve had success with sustainable and scalable models.”

SOCAP16, a conference for impact investors and social enterprise was held in San Francisco this September. The United Nations is also exploring the role of social enterprise startups to partner with NGOs and help solve problems, she said.

Students in Mooney’s classes launch and run social enterprise businesses or travel to developing countries to use their business skills to consult with nonprofits.

“This new generation of students says ‘Sign me up,’” she said. “They’re clueless. They don’t have any fear of risk.”

Micro-financing is the backbone of social enterprise globally, Mooney said.

“Because there’s no way we can help people pull themselves out of poverty if we don’t get them access to capital. And it helps them engage in the marketplace.”

In the past, poor farmers in developing countries had no access to capital or if they did they were such risky borrowers interest rates were at 50-60 percent. But groups such as Kiva found that lending small sums to peer groups — at first to women — was a safe investment. “Payback rate is 99 percent,” she said.

Now big banks and other finance groups have become interested in the concept, and that’s helping social enterprise businesses, she said.

“You can invest in these entrepreneurs and you get the money back. Then you can take it out, or reinvest it again.”

In Illinois, social enterprise companies have gotten a boost from Impact Engine, LLC, formerly a business accelerator for socially conscious businesses and now a $10 million seed fund that will invest “$25,000 to $250,000 into startups that tie their financial performance to social and environmental impact,” according to published reports.

Impact Engine was founded by Jamie Jones at Northwestern’s Kellog School of Business and Linda Darrah at University of Chicago’s Booth School of Business. NIU grad and business school donor Dennis Barsema was an early director.

The company invested about $700,000 in 23 companies as well as providing mentoring and a 12-week “business bootcamp.”

Illinois-based companies that sprung from the Impact mentorship include Habitat for Humanity’s ReStore that recycles and resells construction materials. Spark Ventures creates local food and farm businesses in emerging countries to support charitable organizations. Piece & Co. provides wholesale artisan crafts and textiles to western markets. Zero Percent is an app-based company that coordinates the delivery of excess food from commercial sites to food banks and charities.

“Social entrepreneurs are a unique group who think they can make a difference, and thank God we have them,” Mooney said.

Illinois and the Chicago area have become a hub for other social enterprise companies and accelerators.

The group seeks to develop a social enterprise model that can be followed throughout the country.

The commission will encourage technology and innovation to address urban ills such as “food deserts” or lack of grocery stores. The group also seeks to work with the Cook County Land Bank to revitalize blighted neighborhoods and restore the Port of Chicago with impact investment and philanthropy.

Commission member Emile Cambry Jr. founded Blue1647 in Pilsen as a space to bring technology opportunities to children of color in Chicago. The company has expanded to St. Louis, Los Angeles California and Texas and now offers adult training, business incubation and programming classes, as well as connecting students with jobs and internships. Cambry said students work with the City of Chicago’s Data Portal to “spark innovation at the neighborhood level.” Social enterprise is a natural instinct, he said. “The first thing students do is try to create apps to use that data in ways to benefit the community,” Cambry said at a recent panel discussion at the Illinois Campaign for Political Reform.

Although Ekistic is not exclusively a social enterprise funder, Spielfogel said some of the companies they are interested in have tech solutions that cross into both worlds and solve major urban problems in a socially responsible way.

“For example in the court system — traffic tickets for example — people don’t know what the remedies are or how to fight them. Are there ways to add a technology layer or intervention to help low-income folks navigate the system?” Spielfogel asked.

“Governments have started putting their data online and people and governments are evolving to use data to make smarter decisions,” said Spielfogel. “We’re looking for companies that are utilizing that data in a smart way.”