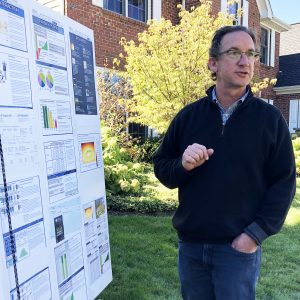 Naperville resident Dan Knotter talks about the benefits of using solar power but warnes that tax creditor on solar system swill start to diminsh next year. (Photo by Cathy Janek / for Chronicle Media)

Installing a solar energy system was something Downers Grove’s Vera Miller had thought about for a long time—even years ago when she lived in an apartment.

With prices for solar energy systems falling, combined with the current state and federal incentives, and “exponentially improving” technology, Miller said, “It seemed like the right time to go for it.”

This past April, she installed a 12-panel system on the back of her home.

Beginning in May, net metering took effect. Miller explained since “solar produces more energy in the summer than you are using, ComEd applies credits back to your bill in the winter.”

“We sized our system to cover our home’s energy needs and hopefully, over the year, our bills will stay low even in the winter when the system won’t be producing as much energy,” Miller said.

Still on the ComEd grid, she explained, “All the excess energy we are not using goes on the grid and at night when the system is not producing energy, we still use the grid.”

“The grid is acting as our battery,” Miller said.

This year, her home was one of more than 100 on the Illinois Solar Tour, hosted by the Illinois Solar Energy Association (ISEA), an open house event that allows the public to view real-life examples of businesses and homes that have cut their utility bills by going solar.

Miller said, next spring she will receive a 30% federal tax credit on the cost of her installation.
As part of the Illinois Future Energy Jobs Act, the Millers will also receive Renewable Energy Credits.

Miller said, a recent change in the law allows the credits to be “paid up front for small installations.”
Based on the total credits and rebates, Miller says she will pay about “one-third” of the total cost of the solar panel installation.

But the rebates won’t last forever.

About two years ago, Knotter said that the “economics were getting to the point where I realized putting in a solar energy system was worth it.”

However, he added, “I had no idea what things were variable and what the cost was.”

Knotter spent two years studying solar energy systems and even took classes on how to become an installer himself.

He admits installing solar panel initially was a bit of a hard-sell for his wife.

But he says she came around, and Knotter found a new passion.

Knotter installed his system, last year and now offers up his expertise to others who are interested in putting a solar energy system on their homes.

He put together a website, www.mysolarcalc.com that homeowners can use to assess their roof’s possible energy production based on position of trees and direction.

According to Knotter’s website, in addition, the value of the electricity produced in its first year will be $1,437.

“This amount is from our two sources of income which are the electricity our panels produce ($557), and the checks we receive ($880) for our renewable energy credits (SRECs),” the website stated.

The break-even of the system’s cost is on track to occur in the sixth year.

Interested in “reducing the carbon footprint on our planet,” so much so that he didn’t turn on his air conditioning all summer, Jim Galbreath, a retired pastor, installed solar system on his Woodridge home in March 2017—the first home he has ever owned as he previously had lived church parsonages.

Galbreath’s system has generated 5.01 megawatt hours “which is a lot of electricity,” he said.
When the system was installed, he estimated that he would begin to see payback in seven years; however he said, newer systems can see payback in four or five years.

Galbreath says his next new car will be a plug-in hybrid and for him “it is very exciting for me to be making my own fuel for my car.”