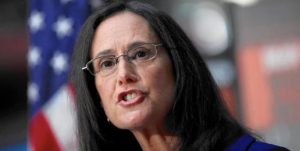 Illinois Attorney General Lisa Madigan has filed suit against Sterigenics of Willowbrook, alleging air pollution violations. The company says it “has operated and continues to operate well within the limits of its permit and the regulations.”

In addition to filing suit, Madigan and Berlin called on the Illinois General Assembly to address the public health impacts from the use of EtO.

Madigan and Berlin’s lawsuit, filed Oct. 30 in DuPage County Circuit Court, includes one count of causing, threatening or allowing air pollution and one count of maintaining a common law public nuisance, alleging Sterigenics poses an unreasonable and substantial risk to public health and welfare, and the environment.

Madigan and Berlin’s lawsuit seeks to ban Sterigenics from further air pollution violations and seeks an operating or emission limit that fully protects human health and the environment. If the court finds that there is no safe level of EtO emissions in the community, Madigan and Berlin ask that the court ban the company from all EtO emissions.

“For too long, Sterigenics emitted a dangerous, toxic chemical into the air putting the public’s health at risk,” Madigan said. “In addition to filing our lawsuit, I urge the General Assembly to pass legislation to ban or greatly restrict the use of ethylene oxide in Illinois.”

“My office will not sit idly by while our residents are exposed to a noxious gas categorized by the U.S. Environmental Protection Agency as an agent ‘carcinogenic to humans’ as is alleged in this case,” Berlin said. “We are alleging that since at least 2006, through July of this year, the defendant, Sterigenics U.S., LLC, allowed the release of ethylene oxide gas into the atmosphere dangerously close to a densely populated residential area with nearly 20,000 people living within one mile of the alleged release. The issue of clean air is not negotiable.”

Company officials said they were disappointed that Madigan has chosen to assert “air pollution” and “public nuisance” claims against the Willowbrook facility.

In a statement, the company noted the lawsuit “expressly recognizes that Sterigenics has operated, and continues to operate, well within the limits of its permit and the regulations.  Any action brought against a business operating well within regulatory limits sets an extremely bad precedent.

“The sterilization process that we operate is the only one approved by the (U.S.) Food and Drug Administration for sterilizing many vital medical instruments, devices and surgical kits, necessary for surgeries and other health care procedures.  As such, any disruption to the operations of the Sterigenics Willowbrook facility would seriously undermine the ability to proceed with scheduled surgeries and procedures and would put patients’ lives at risk.

“By properly controlling emissions and preventing life-threatening infection, the Willowbrook facility serves to improve public health every day. We will work with public officials to achieve the appropriate limits to allay the concerns of the community and the regulatory agencies.  However, we will vigorously defend ourselves against this lawsuit.”

Sterigenics and its use of EtO came under scrutiny after U.S. EPA updated its assessment of the risk posed by EtO emissions. In a 2016 report, U.S. EPA classified EtO as a known human carcinogen and more dangerous than it had previously classified the chemical. Based on that new evaluation of EtO’s risks, in August, the U.S. EPA released the National Air Toxics Assessment report. The NATA report provides information on the cancer risks from breathing air with toxic chemicals. As a result of the Sterigenics plant’s emissions, the NATA released in August identified Willowbrook as a community exposed to high and unsafe levels of EtO.

In December, as the U.S. EPA was preparing the NATA report, it contacted Sterigenics to raise the issue of the plant’s emission of EtO. Then, prior to the release of the NATA report, in July, Sterigenics installed new pollution controls at its Willowbrook site to reduce the amount of EtO emissions. Sterigenics, with Illinois EPA and U.S. EPA oversight, has since performed new stack testing that analyzed emissions at the site. According to Sterigenics, that testing indicated that no EtO was detected at or above the federal limit, which is 0.10 parts per million. U.S. EPA is analyzing the results of that testing.

Following the release of the NATA report in August, Attorney General Madigan called on the U.S. EPA to immediately perform ambient air testing in the community around the site and to immediately provide relevant information to the public to assist the community in understanding the risks posed by the current levels of EtO emissions by Sterigenics. U.S. EPA committed to conducting the testing, though the testing has not yet been completed.