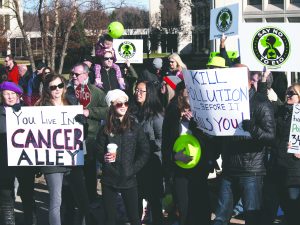 Willowbrook-area residents protest in December in front of the Sterigenics offices in Oak Brook. The Illinois Environmental Protection Agency has halted the company’s sterilization of medical equipment at its Willowbrook facility due to ethylene oxide being emitted into the air. (Chronicle Media file photo)

Willowbrook-area residents and public officials are expressing relief over action taken to stop the sterilization of medical equipment and other items at a local plant.

John Kim, acting director of the Illinois Environmental Protection Agency, issued a seal order Friday to the facility located at 7775 S. Quincy St., Willowbrook, to prevent the commencement of any new sterilization cycles using ethylene oxide to prevent emissions, “which present an imminent and substantial endangerment to residents and off-site workers in the Willowbrook community.”

“The Illinois EPA and Illinois Attorney General’s Office have been in numerous discussions with Sterigenics to discuss how to further reduce ethylene oxide emissions,” Kim said. “Recent elevated sampling results, along with Sterigenics’ refusal to voluntarily suspend operations, have resulted in the issuance of the seal order.”

Company officials said the Illinois EPA’s actions to suspend operations at their Willowbrook facility are “indefensible.”

“Sterigenics Willowbrook has consistently complied with all state permits and regulations; and Sterigenics has been in ongoing cooperation with the Illinois EPA and other officials regarding the safe operation of the facility,” the company said in a statement. “Unilaterally preventing a business that is operating in compliance with all state permits and regulations from carrying out its vital function sets a dangerous precedent.”

Residents of the area were happy to hear the news, but know that more needs to be done.

“This is not over,” Margie Donnell, a member of the Stop Sterigenics group on Facebook, posted Saturday. “In fact, we will need to fight even harder than before. We require legislation to protect us.”

Donnell said while sterilization may have stopped, items already sterilized will be in aeration rooms at the Willowbrook facility for up to a week, meaning off-gassing will take place, and trucks will be going in and out of the facility.

The IEPA’s seal order precludes the introduction of ethylene oxide into sterilization chambers.

The ATSDR has used the highest residential area and commercial air samplings (2.1 micrograms per meter and 9.1 micrograms per meter, respectively) to reach its conclusion, Kim said. He added that since that spring testing, air sampling conducted by the U.S. EPA and the village of Willowbrook has consistently found outdoor level of ethylene oxide in commercial and residential areas as high or higher than the levels used by the ATSDR.

Ethylene oxide is one of 187 pollutants that Congress classified as “hazardous air pollutants,” also called “air toxics.” The Clean Air Act instructs the U.S. EPA to regulate air toxics by setting limits on the amount of pollution that industrial sources can emit to the air, rather than by setting ambient standards, which are limits on the amount of a pollutant that is allowed in the outdoor air. So, the agency does not have a “bright line,” or a level, for ethylene oxide below which air quality is considered OK.

Kim said the seal order will remain in effect until he rescinds it.

Area resident Mallory Clark thanked the Stop Sterigenics group on Facebook for all of their hard work.

“We wouldn’t be anywhere near where we are today without their determination,” Clark said. “Thank you for fighting as hard as you do. We won’t give up until Sterigenics is out of our community!”

DuPage County Board Chairman Dan Cronin said he welcomed the news of Stergenics’ closing for the thousands of people living near the plant.

“Achieving this outcome took months of painstaking work and critical attention to detail,” Cronin said in a statement, “Nothing is more important than the health and safety of the people living near this plant. This action provides a prudent step, allowing for further investigation and understanding of the health risks associated with operation of the facility.”
State Rep. Jim Durkin (R-Western Springs) said the seal order was a great step.

“I appreciate the efforts of everyone who has worked together over the past year to finally bring safety and peace of mind back to our community,” Durkin said in a statement. “Sterigenics has failed our residents, and (its closing) should put any other entity that threatens the health and safety of residents in Illinois on notice.”
Illinois’ two U.S. senators, Dick Durbin and Tammy Duckworth, supported the Illinois EPA’s action.

“Ethylene oxide emissions from Sterigenics and the lack of oversight by the U.S. EPA have created a public health emergency that threatened the well-being and safety of Willowbrook, the surrounding communities and the Sterigenics employees who were likely exposed to toxic chemicals,” the senators said in a joint statement. “We will continue to demand the U.S. EPA do its job and address these kinds of cancer-causing emissions.”

Sterigenics officials said the Illinois EPA’s decision will place the health and lives of thousands of patients who rely on medical products sterilized at Willowbrook at risk.

The company said it will comply with the order, but will take all legal action necessary to reverse the decision.