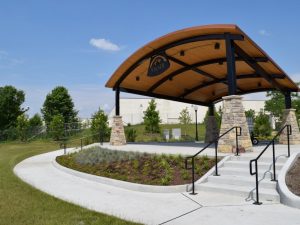 BrightSide Theatre, Naperville’s only professional theatre, in partnership with the Naperville Park District, is bringing a new program to the parks in Naperville this summer.

“Summer in the Parks: The Music of Rodgers & Hammerstein” will perform on three Wednesdays throughout the summer at the Wagner Family Pavilion, located at the 95th Street Community Plaza, 3109 Cedar Glade Drive in Naperville. Performances will take place on June 30, July 21 and Aug. 11 at 7 p.m.

BrightSide Theatre is partnering with the Naperville Park District to provide this opportunity free of charge.

BrightSide Theatre’s Artistic Director, Jeffrey Cass said, “With many arts organizations unable to perform during the pandemic, this was a great way to pivot and bring the performances safely to the outdoors.  This is a great opportunity for residents of all ages and backgrounds to come out with their blankets and lawn chairs to enjoy an evening of music in the Naperville parks.”

“We look forward to hosting these performances at the 95th Street Community Plaza and providing an introduction to live theater for the community,” said Program Manager Brittany Malatt.

BrightSide Theatre will bring five singers and three musicians together to celebrate and sing the music of Richard Rodgers and Oscar Hammerstein II.

In this hour-long music revue, songs will be sung from Rodgers & Hammerstein’s Broadway Classic Musicals such as “Cinderella”, “The King and I“, “South Pacific”, “Oklahoma”, “The Sound of Music“ and many more.  This production is sponsored in part by Republic Bank and partially supported by the City of Naperville’s SECA Fund, the Illinois Arts Council Agency and the DuPage Foundation.