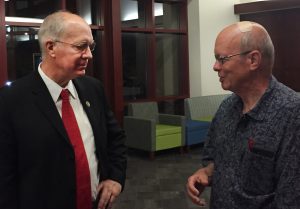 A handful of potential voters last week witnessed a rarity in this election season — a debate between two major party candidates for Congress.

The meeting, however, attracted only 20 people at Crimi Auditorium, a disappointment for debate moderator Patricia Lackman of the League of Women Voters.

“That’s kind of a sad state of affairs,” she said.

The Foster-Stella debate, sponsored by the league’s Central Kane County chapter, has so far been the only public meeting between incumbents and challengers in three congressional races that cross through several west suburban counties.

Both Roskam and Hultgren also passed on a similar candidate session recently at McHenry County College.

“I’m disappointed that the other incumbents representing Kane County (Hultgren and Roskam) did not see fit to appear,” Foster said. “I’m an incumbent and it’s always tempting to (not) debate my opponent. We’ve seen that from two of the three congressmen who represent Kane County and I think Kane County voters should take heed of that.”

In an era of hostility and hyper-partisanship, Stella and Foster were cordial and respectful even as the left-leaning Foster and conservative Stella represented differing political perspectives. 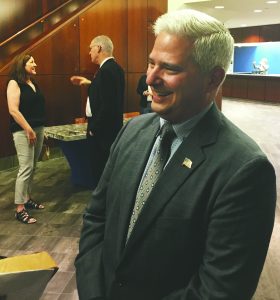 “The partisanship that has divided this country is absolutely disgusting to me,” said Stella. “Our Congress is not accomplishing things because of partisan bickering. What our Congressman must realize first and foremost is that they are there to represent all of us. Before they are Democrats and before they are Republicans, they are Americans.”

Foster emphasized his continued support for the Affordable Care Act, preserving and expanding Medicare and decried tax legislation that resulted in “massive tax cuts to the wealthy.

“I believe that the recent Republican tax plan was a historic mistake,” Foster said. “What this deficit-fueled spending has done is triggered inflation. Recently the government reported that the wage increases that workers have seen are being wiped out by inflation. So workers are actually falling behind inflation. … (But) it’s been a good year for the CEOs, the CEOs have done very well.”

“We need to look at the wonderful things that have come from our recent tax bill,” said Stella, a cardiologist from Darien. “Last quarter we were at 4.2 percent growth in GDP (Gross Domestic Product) and those tax cuts have helped put money back in the pockets of everyday working class Americans.

“The hope is that by growing our economy we will increase our tax revenue.”

Stella has a steep climb in his effort to unseat Foster in a district, which includes portions of DuPage, Kane, Kendall, Will and Cook counties.

No polls on the race have been released, but national political analysts like the Cook Political Report, Inside Elections, Sabato’s Crystal Ball and Real Clear Politics rate the district as strongly Democratic.

Foster, first elected in 2012, also has a significant financial advantage. According to reports filed with the Federal Elections Commission through June 30, Foster has a reported $3 million in campaign cash on hand to $81,826 for Stella.

Stella is making his second run for Congress. He narrowly lost a 2016 bid for the Republican nomination to Tonia Khouri, who then collected just 39.6 percent of the general election vote against Foster.

In March, Stella had nearly 80 percent of the GOP primary vote to handily beat Connor Vlakancic.