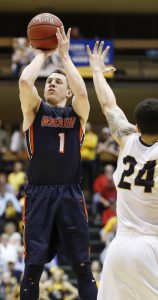 Wheaton senior Aston Francis sets up for a shot during a game this season. He set a single season NCAA Division III record with 1,096 points. (Wheaton College photo)

The loss may sting for a while, but it’ll never diminish one of the greatest seasons in Wheaton College basketball history.

A 104-85 semifinal loss to Wisconsin-Oshkosh on March 15 abruptly ended the Thunder’s first trip to the NCAA Division III Final Four.

“When you lose, you often want to come up with explanations, excuses, but in reality at this point, all you can really do is tip your hat to them,” said 10th-year Wheaton coach Mike Schauer. “I thought they [UW-Oshkosh] were sensational. We could not find a way to stop them.”

En route to that showdown the Thunder (23-9) were pretty sensational, too. They had four straight postseason wins — three over ranked teams — to reach the four-team finals at the Allen County War Memorial Coliseum in Fort Wayne, Ind.

Wheaton was an afterthought as the Division III field started to take shape just three weeks ago.

They were also CCIW tournament semifinal losers and weren’t even ranked among the nation’s Top 25 in a final poll.

Still, the Thunder had enough in their favor to qualify for the NCAA and then played their best basketball at precisely the right time.

“We thought (the Final Four) was possible,” said Aston Francis, the NCAA’s most prolific scorer and senior from Tyler, Texas. “When we play well we feel we can play with anybody and we can beat anybody.”

Wheaton would not have reached the Final Four without Francis, who set a Division III single-season record with 1,096 points and was second all-time with 173 made 3-pointers over 32 games.

Francis, who also owns a series of school single-season and career marks, entered the Final Four leading all NCAA divisions with his 33.9 points and five-plus-made 3-point tries per game.

He also captured the CCIW’s Most Outstanding Player award in back-to-back seasons and won the Jostens Trophy, awarded to Division III’s most outstanding men’s and women’s players.

Francis, who averaged 45.0 points in four tournament games, broke his own school record with 62 points on March 9 in a 91-87 win over Marietta.

“I definitely felt good in the first half. I got my first three or four shots to go down and I felt like I going a rhythm going,” he said. “My teammates did a great job of continuing to screen for me. The pace of that game was so fast that we were going to get a lot of shots up.”

The Thunder also had a talented midseason transfer and a core group of seniors who rose with a program that recorded just five wins when they were freshmen.

Sophomore Luke Anthony transferred from Dayton at midseason and posted 8.6 points per game and a team-best 45 percent (27-of-60) on 3-point shooting. In four NCAA tourney games, Anthony averaged 12.3 points.

“He instantly impacted our team positively,” Schauer said. “We were 15-4 since he started to get into the rotation. He (was) like a piece of the puzzle we’re missing — a big guard who can make shots along with Aston.”

Both Schauer and Francis, who transferred in as a sophomore, also credited the commitment of a core group of seniors, who rose as the program improved.

“The five guys that were on the floor to finish the game for us were on our team when we won five games,” Schauer said. “We had a postseason meeting after that and talked about getting back to the NCAA Tournament and the things that needed to happen. The core and culture of our team was really formed by those five guys who refused to let us stay there.”

Ironically, Wheaton beat Wisconsin-Oshkosh 86-74 in a nonconference clash on Nov. 16, 2018, the second game of the season.

Last weekend, however, the Titans held a five-point lead at 64-59 with 12:29 remaining in the second half and scored eight unanswered points to take a 72-59 lead with 11:01 remaining in the game.

Oshkosh maintained a double-digit lead the rest of the way as five players scored in double figures.