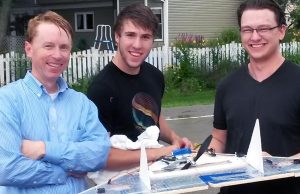 Two Northern Illinois University seniors in mechanical engineering have been named finalists in the SPACE RACE Startup Challenge, a first-of-its-kind initiative to encourage entrepreneurs to use federally funded NASA technologies in their startup companies.

NIU’s Kyle Bodie of Warrenville and David Frey of Wheaton teamed up with a Chicago-area entrepreneur and a graduate student from Texas to develop their proposal for a startup company named Maverick Drones. Now, as a finalist, the team can move on to the third phase of the competition, pitching its idea to investors.

“It was a lot of fun,” Frey says. “This was more of an entrepreneur-based competition. So I learned a lot about business that I’ll be able to apply in some aspect of my career.”

The NIU team proposed using drone technology developed by NASA to promote an interest in STEM and develop analytical skills among students in grades 5-12.

Students would build and program their own drones to compete in various challenges called “Missions Improbable.” Missions could include such tasks as finding and rescuing a friendly alien named “Bob” or using a drone to fight a forest fire.

Sorensen then mentored the NIU students during the SPACE RACE competition and brought in a fourth partner, Rafael Garcia, an MBA student at the University of Texas at El Paso.

The team created a video to explain its concept; conducted market research with teachers, parents and children; wrote a detailed business plan; and made a 5-minute live pitch via web conference.

The experience “gave us a feel for how the sciences and marketing interact,” Bodie says.

“In engineering, you focus on how everything works,” he adds. “Here you had to apply that knowledge to a real-world business setting.”

NASA collaborated with the nonprofit Center for Advancing Innovation (CAI) to run the multi-phase business plan competition. Startups launched from the SPACE RACE will be tasked with incorporation and licensing of NASA technologies. The 15 winners and finalists in the competition can receive continued guidance from CAI and available support from NASA technical personnel.

“We’re still in the hunt,” Sorensen says. “Once we lock down the license, we’ll go out and raise seed capital.

“Usually, it’s hard for startups to get technology licenses because they have no resources to pay for licensing fees,” Sorensen says. “This competition turned the regular process on its head. The startup gets the license first, and then can seek venture capital funding, which makes more sense.”

Sorensen says he was impressed with Bodie and Frey, who came up with the core idea to develop plug-and-play sensors after lengthy brainstorming sessions.

“Every startup has a core insight,” he says. “They came up with the idea to make a modular drone, which is perfect for this NASA technology.”