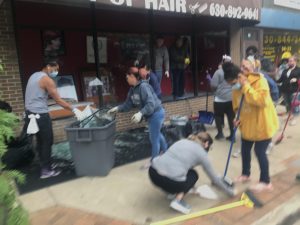 Volunteers come out to clean up outside businesses following riots in downtown Aurora. (Photo by Jack McCarthy)

Aurora Police reported 17 arrests and at least $3 million in property damage following a night of violence that began with a peaceful Sunday protest and ended with a citywide curfew and state of emergency in the state’s second-largest city.

A full damage assessment is ongoing, but as of midday Monday there were at least 65 reports of criminal damage to property and at least one business — a Family Dollar store east of downtown — completely destroyed by fire.

Fires were set in at least one other building according to an Aurora police report released early Monday.
Violence was also directed at police working to try and keep the downtown area safe.

In at least two instances, shots were fired at police working to contain crowds while three squad cars were also set on fire and destroyed. Bricks, glass and rocks were also thrown at the officers and one Aurora police officer suffered injuries.

Aurora Police requested mutual aid assistance through the Illinois Law Enforcement Alarm System, bringing officers from all over the state to assist with the response.

Irvin said at a Monday media briefing that the state of emergency was ongoing and that a curfew would extend through 6 a.m. on Tuesday.

Irvin’s action came after a peaceful local protest got out of hand, the latest in a nationwide series following last week’s death of an African-American man in Minneapolis while in police custody.

On May 25, George Floyd was handcuffed and lying face down on a street when a Minneapolis police officer placed a knee on Floyd’s neck for nearly nine minutes causing him to become unresponsive. He later died.

The death sparked local protests that later spread from coast-to-coast including violence in Chicago that led to a curfew and shutdown of the central business district.

“Today we hosted a peaceful protest at the Aurora Police Department,” said Irvin, who participated in the protest with Police Chief Kristen Ziman. “However, once the protest ended, the crowd dispersed and then grew substantially with other participants throughout the streets of Aurora.”

“While Chief Ziman and I were honored to participate in the initial protest, we will not tolerate lawlessness in our city,” Irvin said.

The Aurora police department protest drew an estimated 800 people, which grew to 1,200 by the time the evening destruction began in downtown area.

A statement from Irvin cited “widespread incidents of violence, vandalism and stealing throughout the area.”

The curfew took effect at 8:30 p.m. Sunday, lasting through 6 a.m. on Monday. The statement called on residents to remain at home or work during the timeframe. Interstate 88 entrances and exits through Aurora were closed.

Separately, DuPage County Board Chairman Dan Cronin issued a statement on Sunday supporting peaceful protests but warning that destructive acts would not be tolerated.

“We condemn the actions that resulted in the death of George Floyd and we support people’s right to assemble and peacefully protest,” Cronin said. “But there is a difference between protesting peacefully and committing criminal acts. Protestors in DuPage County who damage or destroy private or public property, or who commit criminal acts like arson, burglary, and criminal damage to property will be arrested, prosecuted and if found guilty, imprisoned.”