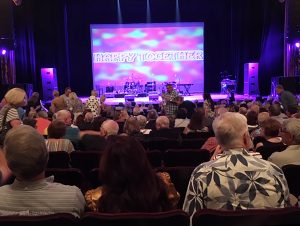 Well over 100 people paid $25 a head to enjoy a pre-concert party and fund raiser Friday evening  at the Meyer Ballroom across the street from the Paramount.  At right, audience gathers inside the Paramount Theatre for last Friday’s Happy Together concert. (Photos by Bill Dwyer / for Chronicle Media)

Aurora’s Paramount Theatre opened up it’s 2019-20 season with an oldie but a goodie that was, well, all about some really good oldies.

The 10th annual Happy Together tour, headlined by the Turtles and backed by a mostly strong collection of oldies bands, featured ex-Three Dog Night singer Chuck Negron, Gary Puckett, Chicago’s own Buckinghams, The Classics IV and the Cowsills.

Last Friday’s concert was the official kick off to a Paramount’s season that starts this month and runs into next spring. Saturday night saw Broadway theater legend and songstress Bernadette Peters take the stage.

The show was a nod to the music from an era that cut a deep groove into the brains of tens of millions of Baby Boomers. All of the songs were hits, most of them half a century or more ago, but to an aging audience of nearly 1,900 folks harboring cherished musical memories, time didn’t matter.

It didn’t matter to the performers either. As Tony Bennett once said, “I can’t expect my audience to have fun if I look like I’m not having fun.

And there certainly was an abundance of fun Friday night, both on stage and in the seats. The joy of a great pop or rock or blues song never dies. It may fade away in the everyday world, but lives on in an ageless space within the music fan’s heart, fresh and strong upon recall.

One by one Friday night, the artists, most of them in their 70s, called up great pop music that hailed back to a time before MTV and online music videos.

Instead, it harkened back to a time when 99-cent records and when quality lyrics and story telling coupled with great music, hooks and melodies elicited scenes that played out in a listener’s personal theater of the mind.

Friday was the 45th date in a 51-date summer tour that wraps up Aug. 26. This summer marks Turtles founder Mark Volman’s 55th year in the music business, a career that’s seen him and music partner Howard Kaylan play with some of the biggest names in the business, including Marc Bolan of T-Rex, Alice Cooper and Frank Zappa.

As Flo and Eddie, the duo has been touring the country since the mid-80s, partnering with an array of 60s and 70s bands.

Volman, now 72 and a college professor when not touring, founded the Turtles in the 1964 with singer Kaylan who, due to health problems, was not on this year’s tour.

Negron’s voice has lost some of the amazing honey/silk tones that helped make Three Dog Night a ‘60s megaband. “Wow. That was a bridge too far,” he said, after a rousing ‘Eli’s Coming,’ clearly trying to catch his breath. “I’m gonna need a little nap.”

But that didn’t stop him from tearing into “Joy To The World,” and he soared on the hits “Mama Told Me Not to Come,” and Easy to be Hard,” leaving to a standing ovation.

Gary Puckett opened the second half of the show, taking the stage like a star, one who looked like he could run a 10K race. While his voice was thin at times and he had to reach for higher notes, he was masterful, moving through five of his hits, including “This Girl is a Woman Now, “ “Woman,” and “Young Girl.”

The show opened with an energetic and joyous five song set by the Cowsills. Only the two oldest original Cowsill brothers, Bob and Paul, performed, but they were more than ably accompanied by youngest sister Susan, who was little more than a toddler when the Cowsills broke big.

Opening with a peppy version of “The Rain, The Park and Other Things,” they moved into “Indian Lake,” and “Love American Style,” the theme song for the TV show of the same name.

They had a lot of fun with their closing number, the number one hit “Hair,” as Susan Cowsill, soon to turn 60, bopped about the stage with the energy of an excited teenager when she not delivering melodic vocals.

Following an entertaining Turtles set that blended great musicianship with some genuinely funny comedy bordering on vaudeville schtick, Volman brought each of the acts back on stage for a reprise at the finale. Standing hand in hand across the stage, the artists traded applause with their audience, which was on its feet  cheering.

In September, the Paramount will host the first of four Broadway plays, Newsies. Paramount officials are particularly excited that the theater’s talent pool is taking major roles in several of the plays. Newsies, which opens Sept. 4 and runs through Oct. 20, is directed by Paramount Artistic Director Jim Corti.

That will be followed by Beauty and the Beast, directed by Amber Mak, Paramount New Works Development Director, from Nov. 13 through Jan. 19. Next up will be the world Premiere of The Secret of My Success, Feb. 12 to March 29, and Kinky Boots, directed by Paramount Artistic associate and casting director Trent Stork.