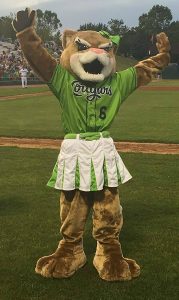 The Kane County Cougars have announced an addition to the family.

Annie T. Cougar was introduced to Cougar fans as the newest mascot for the team during a Cougars game.

She’s the younger sister of Ozzie, the team’s longtime mascot, and will serve as an ambassador of goodwill and fun. Both Annie and Ozzie will appear at all remaining home games throughout the 2016 season.

While the team is away from the ballpark, they will stay active in the community by making appearances at schools, churches and youth sporting events.

“The fan reaction to Annie has been tremendous,” said Cougars General Manager and Vice President Curtis Haug. “The sibling dynamic between both Annie and Ozzie is fantastic and will only help us to reach more people throughout the community moving forward.”

The Cougars are the Class-A minor league affiliate of the Arizona Diamondbacks and have been in operation in Geneva since 1991.