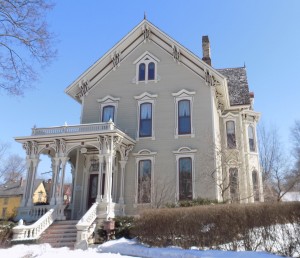 Elgin, is a great example of historical districts done right, according to Mary Lu Seidel, field director in the Chicago Field Office of the National Trust for Historic Preservation. (Chronicle Media Photo by Jack McCarthy)

Historical districts may not pop up in the political rhetoric of the primary election season, but they are at the heart of a growing debate centered on local politics, urban economies, land-owner rights, historical preservation and affordable housing.

Advocates of historical districts maintain that the benefits that they give local commerce and residents outweigh any drawbacks perceived by way of structural restrictions.

Opponents of them, however, say that the right questions simply aren’t being asked, resulting in the potential disenfranchisement of lower-income residents and businesses.

This is a debate playing out throughout the country — per The Atlantic’s CityLab site’s dueling coverage — and Illinois is right in mix, with Cook County boasting 106 historic districts and Lake County 23, according to the National Register for Historic Places.

“It’s important for us to remember how we lived and what we were,” said Mary Lu Seidel, field director in the Chicago Field Office of the National Trust for Historic Preservation. “Here, I’m sitting in a historic building and I look across the street at an historic building. [Historical districts] tie us to our history and who we are.

“I have seen historical districts in cities like Elgin completely transform and revive distressed, but also historic, areas. I’ve seen it used very successfully as a redevelopment tool and people find great value in knowing that the character [has been preserved].”

Seidel explained that Elgin, is a great example of historical districts done right. 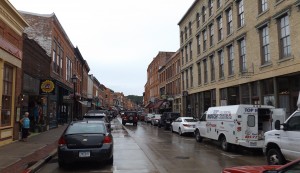 “It has an incredible inventory of old homes of every style. If Elgin didn’t have historic districts that helped preserve and maintain that character that was what their town was founded on, how would it be any different than [any newer] suburb?” she said.

Consider Galena, Seidel said. She recalls being there on a fall evening when it “was packed with people walking a half a mile away from their cars to shop at these unique and independent stores. If you didn’t save those beautiful buildings, the character and that whole neighborhood, people wouldn’t even go there. When you walk around the place, it’s what makes us different, it’s what makes us unique; it defines who we were and who we are now. And when we tear them down, it also tells a little story about who we are.”

Illinois is a hotbed for historical preservationists, agreed Diana Dretske, a Lake County historian. “There’s definitely a broad interest here for historic preservation, and also for local history,” she said.

Dretske said Waukegan has one of the more active districts, plaque-ing buildings, investing in research and organizing home tours.

“Every community has their own story to tell and, well, Cook County is more closely tied to Chicago and its story, but out here in Lake County, we have our own story with being a place where people kind of went to get away from Chicago,” she said.

“And even in the Northwest corners of the county where the Chain O’ Lakes area is,” she continued, “they have a huge culture of resort industry out there, and even Chicago gangsters coming out there and living during the Prohibition era. So each different part of the county has a different story to tell.”

“The southern end of [Lake] County,” Dretske added, “has a lot more German settlers and the eastern part of the county has a lot more English, Irish and Scottish. There’s nuances everywhere.”

“People like going to old places,” Seidel said. “It’s good for business. … And, yes, there are restrictions on what you can and can’t do in a district,” Seidel said, “but that’s what keeps the place extraordinary. People who don’t like historical districts will tell you that they’re too restrictive. That the ‘paint police’ are going to tell [you] what color [you] can and can’t paint [your] front door.”

She pointed to zoning laws and municipal ordinances as similar facets of community living: “[Those] dictate what you can and can’t do to your property. Do you like the fact that somebody can’t build a landfill next to your house?”

“I think that there’s certainly benefits to preserving examples of important architecture, and diversity of building ages can provide great aesthetics and a great feel to a neighborhood. However, I think there are huge costs to historic preservation and, typically, preservationists only look at the benefits, but I think it’s really important to look at those costs,” said Emily Washington, a policy research manager, at the Mercatus Center at George Mason University, an Arlington, Va.-based education, research and outreach organization.

While Seidel maintained that affordable housing can be feasible and successful in historical districts, Washington said that the primary overlooked cost is the reduction of building supply, which is most sharply demonstrated in expensive real estate markets like New York or Chicago.

“If we say that all the buildings that are currently [in this location] have to be preserved,” Washington said, “that means that no new apartment buildings or office buildings can come in to increase the amount of supply that’s available and to keep prices affordable.”

“Filtering means that when a new building is constructed, it’s typically only affordable to high-income residents or office tenants because it will have all the latest amenities and will be built to the highest quality of the times. But over time, that building will become less desirable,” she said.

But that doesn’t happen in historical districts, Washington contended.

“You can’t just build new buildings, so the older buildings stay desirable to the higher income people,” she said.

And there’s no opportunity for lower-income residents to move in.

— Are historical districts in residential areas bad for communities? —