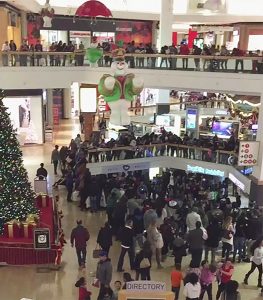 A still shot from a video taken by @BFitman of post-Christmas disturbances at the Fox Valley Mall that was distributed widely on social media as well as on local, national and international television stations and networks.

But the 1.5 million-square-foot shopping destination on Aurora’s far East Side was anything but peaceful three days earlier. The din of shoppers was replaced by shouting, screams and taunts as crowds of young people surged through a food court and others brawled in front of stores.

Eight juveniles ranging in age from 13 to 17 were charged in connection with a series of incidents that began around 6:30 p.m. on Dec. 26 when mall security officers called police after a large group of teenagers began to gather in the mall’s central food court area, Aurora Police department spokesman Dan Ferrelli said.

Several officers responded to the scene and told the teens to disperse. But a short while later a large fight broke out, followed by several smaller altercations.

“It was madness,” an employee of a mall store told WLS-TV.

An Aurora Police sergeant and a mall security guard were both battered while trying to break up the larger fight, but neither victim required immediate medical attention, according to Ferrelli.

As the situation began to quickly escalate, the crowd refused to obey orders from police and security guards. Police said some teens began throwing drinks and other items, creating further danger for bystanders and shoppers.

“With more than 1,000 patrons in the common area and other patrons shopping throughout the facility, Aurora Police made the decision to evacuate and close the mall for the safety of everyone on the premises,” Ferrelli said.

The mall was closed for about one hour while police contained and controlled the situation.

Smart phone videos posted via social media showed several altercations inside the mall as well as attempts by security to break up fights and move young people out of the mall.

Hundreds of people crowded into the center’s main food court while others lined the edges of upper levels to view activity below.

“There were people along the railing and on the stairs,” an employee of a nearby store told a colleague on Thursday. “It was crazy.” 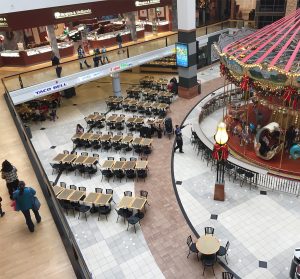 Fox Valley Mall’s central food court is quiet and empty late last Thursday morning as the retail center was back to a typical pattern of shopping and dining after disturbances three days earlier. (Photo by Jack McCarthy / Chronicle Media)

Schools remained closed for holiday break last week but many young people opted to avoid the mall at least during early hours late last week.  Instead, moms with families and children in strollers dominated mall clientele.

There was also little evidence of overt increased security during a late morning mall walk-through, normally a quiet time as the mall starts to come to life.

One uniformed security employee was observed in the food court area and in the nearby security office activity was being tracked elsewhere on the premises as an employee kept track via six monitors.

Whether the placid atmosphere would continue through the New Year’s holiday weekend remained to be seen.

Aurora Police said they would increase security as they continued to investigate what role social media may have played in organizing a large fight that shut down the mall earlier. Police were also trying to determine what connection the disturbance may have to other similar incidents that were reported in several cities across the nation this week.

Aurora Police continue to work closely with Fox Valley Mall security to assure the safety of businesses and shoppers, including conducting extra patrols in the immediate future, Ferrelli said.

“The safety and security of our guests, employees, and tenants at Fox Valley Mall is always our top priority,” Samson said in a statement. “We are thankful to APD for taking swift and immediate measures after the disturbance last night. While we are not able to speak about specific security measures, please know that we work close with local and national law enforcement on all matters relating to mall safety.”

The Fox Valley disturbance was one of more than a dozen reported across the country including malls in New Jersey, Connecticut, Tennessee, North Carolina, Texas and Ohio.

In  Aurora. Colo., an estimated 500 people were involved in a disturbance that led to five arrests.

Back closer to home, the eight juveniles arrested at Fox Valley Mall faced misdemeanor charges, however, police did not rule out upgrading charges to felonies. Ferrelli also said more arrests were possible.

Anyone with information is asked to call Aurora Police Investigations at (630) 256-5500 or Aurora Area Crime Stoppers at (630) 892-1000. Tips can also be submitted through the Aurora Police Department’s free app available from iTunes, the Android Market, or Amazon App Store.

Simply search for “My Police Department”, find the Aurora Police, and download.