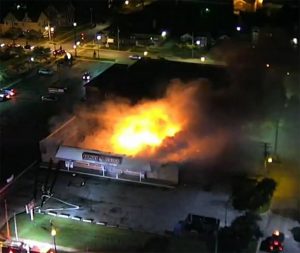 A Family Dollar store east of downtown Aurora burns on May 31 during violence and looting that broke out following what started as a peaceful protest. (Photo courtesy Aurora Police Department)

The City of Aurora has announced it will extend a nighttime curfew as well as travel restrictions through the weekend.

The city said in a statement that a curfew initiated on May 31 would continue through 6 a.m. on Sunday, June 7 with a later start time.

The 10 p.m. start is 90 minutes later than a curfew time established earlier in the week.

Further, the city has lifted overnight closure of  Interstate 88 entrances into Aurora.

Entry into the downtown area will still be prohibited during the curfew without residential or employment identification. Travel restrictions will also be in place near the Fox Valley Mall.

Residents are asked to remain at home and only travel for employment during the curfew hours.

The curfew was abruptly declared on Sunday, May 31  night after “widespread incidents of violence, vandalism and stealing occurring throughout the City of Aurora,” according to Aurora police.

Continued closures came after 17 were arrested and at least $3 million in property damage following a night of violence that began with a peaceful Sunday protest and ended with the citywide curfew and state of emergency in the state’s second-largest city.

As of midday on June 1 there were at least 65 reports of criminal damage to property and at least one business — a Family Dollar store east of downtown — completely destroyed by fire.

Fires were set in at least one other building according to an Aurora police report released early Monday. Violence was also directed at police working to try and keep the downtown area safe.