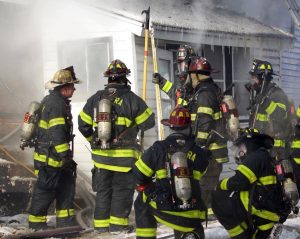 More than 40 firefighters fought frigid temperatures in trying to put out a house fire in the 400 block of Pierce Street on Dec. 31. (Photos courtesy of Firefighter Jim Desomer)

Aurora Firefighters are issuing a warning to residents after they recently responded to two fires caused by people attempting to unfreeze pipes in their homes.

On New Year’s Eve, seven people were left displaced after the two-story, single family home they were staying in was deemed inhabitable.

According to Aurora Fire officials, a resident staying in the home in the 400 block of Pierce Street called 911 to report the fire around 10:54 a.m. He told dispatchers that he was using a propane heater to thaw pipes in his basement when the fire started. Fire officials said the resident tried to extinguish the fire himself before calling 911.

He, and four other people inside the home, exited safely, but not shortly afterward the home became engulfed in flames.

Because of the frigid temperatures that day, the call was upgraded to a third alarm fire and 47 firefighters responded to the scene.

One firefighter was injured battling the blaze and was taken to an area hospital with non-life threatening injuries, fire officials said.

The home was deemed inhabitable and the loss was estimated to be $175,000. Seven people living inside the home will be staying with family in the area.

This was the second fire to occur in two days because of residents attempting to thaw pipes on their own.

The second fire occurred on Dec. 29 at an apartment complex in the 1300 block of Monomoy Street. 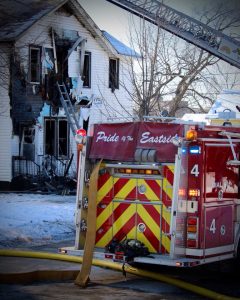 More than 40 firefighters fought frigid temperatures in trying to put out a house fire in the 400 block of Pierce Street on Dec. 31. The fire, started by a resident using a propane heater to thaw frozen water pipes, left the home uninhabitable. (Photos courtesy of Firefighter Jim Desomer)

When they arrived around 12:49 p.m., fire crews found a six-unit, two-story apartment building with light smoke showing from the front. Heavy fire was then found in a common wall that separates two apartments.

A vacant apartment, and one occupied by an elderly man were deemed inhabitable. The man is being assisted by Red Cross.

Fire officials said the building’s owner attempted to thaw out frozen pipes in the basement with a propane heater when the fire started.

The building’s other four units were not affected and the residents were able to return to their homes. The total dollar loss is estimated at $125,000.

The fire department used the incidents to remind residents never to attempt to thaw pipes on their own, but to call a licensed plumber, instead.