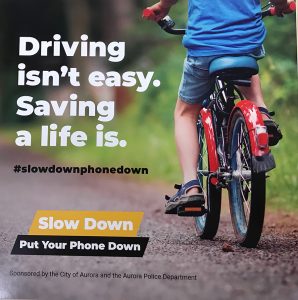 Clutching and talking on a mobile phone while driving has been illegal in Illinois since 2013 but many drivers apparently never got the message.

So the City of Aurora has decided to crack down on both cell phone use and speeding inside the city limits during an enhanced enforcement period running through July 4.

For Mayor Richard Irvin, the bottom line is safety.

“School is out for the summer and there are significantly more children outside playing in the neighborhoods,” Irvin said last week. “We want to put a spotlight on their safety through the Slow Down, Phones Down campaign.”

Irvin said the city has seen an unspecified “significant increase” in tickets for speeding and cell phone use while driving over the past two years.

The campaign includes social media elements and a series of physical signage.

On Facebook, one police department entry said: ‘One “LOL’ or ‘SMH’ could change your life forever. You could end up in jail, injured, or dead. Remember: If you’re texting, you’re not driving.”

Irvin conceded that convincing people to hang up while driving won’t happen overnight and that education may be a long process.

“I remember riding around in my mother’s cars … never with a seat belt on,” Irvin said. “We learned that it was important to wear the  seat belt for safety, that it saved lives.  It was something that we had to train our community to do and it didn’t happen overnight. Now when I get in a car it feel strange when I don’t have that seat belt on.

“We have to do that same thing with cell phone usage. We have to train our community and help them understand the unsafe nature of being distracted while you’re driving.”