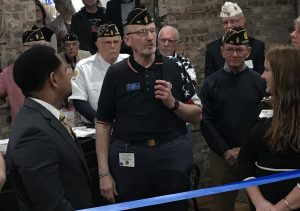 Through the past 100 years of existence, the Aurora-based Roosevelt American Legion Post 84 has answered the call with support of community events, financial help for students and families of veterans as well serving as an advocate for veterans of American conflicts.

Now it’s found a new way to help itself and veterans from throughout the far west suburban region.

The Legion officials dedicated a new office on the newly-renovated third floor of the former Aurora Public Library at 1 E. Benton St., sharing space with the Law Office of McLaughlin and Associates.

The Legion and McLaughlin hosted a joint ribbon-cutting that drew dozens of Legion members and supporters, local elected and business officials and the general public.

“We’ve never had the opportunity to provide a service like this,” said Mike Eckburg, Post 48 commander. “We’re thinking it can be a space where the younger, more electronic-wizardry type of veteran and family member can come in and get on the computers and also come in and search for VA benefit and things like that they they may need.

“We plan on it being a good service office.”

The office includes three computer work stations and desks, space for the Legion and a small dining table with a single place setting honoring prisoners of war and military personnel missing in action.

“We’ll also have utilization of this beautiful conference space as well as the banquet or larger meeting space down in what used to be the (basement) children’s library,” he said. 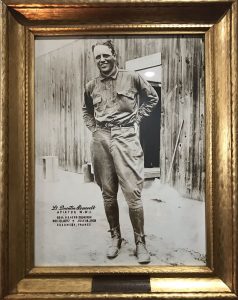 The post is named after Lt. Quentin Roosevelt, youngest son of President Theodore Roosevelt. The younger Roosevelt was killed in aerial combat during World War I. (Photo by Jack McCarthy / Chronicle Media)

The Roosevelt post, one of the state’s oldest, was founded in 1919. It is named for Quentin Roosevelt, the youngest son of President Theodore Roosevelt who was killed during aerial combat in France during World War I.

It currently has around 350 members and is always looking for more, including young blood.

“We’ve been active with that young student veteran organization (at Aurora University) and there’s also another organization like that at Waubonsee Community College so we’re hoping to lure some of those folks in to provide their expertise and services,” Eckburg said.

The office will be available to any veteran, not just Legion members, from a region that includes Kane, DuPage, Kendall and Will counties.

Eckburg said office hours will be determined once the Legion is completely settled in.