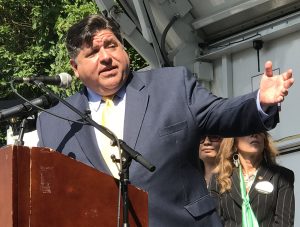 The setting was a one-time auto showroom that once represented the engineering and products of yesterday.

Now restored and infused with the latest in technology, the three-story building on the historic LaSalle Street Auto Row promises to be the the hub of an effort to propel Aurora into the future.

“The new 605 Innovation District will be the driving force and catalyst for new ideas and partnership and future workforce and economic development,” said Aurora Mayor Richard Irvin in front of several hundred people during an outdoor launch ceremony.

The district would link technology and government, educational institutions, private business and individuals through digital applications and collaboration.

Bureau Gravity, a 20-year-old communications company located at 56 S. LaSalle, will serve as the initiative’s headquarters and digital hub.

No specifics, other partners or agreements were announced although Irvin said the city and Florida-based Smart City is ready to conclude a memorandum of understanding as part of a reported multi-million dollar investment.

Pritzker is no stranger to high tech startups. He launched Chicago’s 1871 initiative, now touted as one of the nation’s leading centers for technology and entrepreneurship.

“Seven years ago when I founded 1871 in Chicago, people said that it just couldn’t be done,” Pritzker said. “Since then, 1871 has been named the best incubator in the entire world. Over 11,000 jobs have been created there and I know that’s going to happen in Aurora.

“Now, Aurora will be among absolutely the best technology hubs charging forward to build the economy of the future for our state,” Pritzker added. 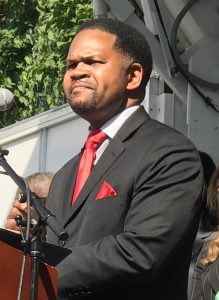 Aurora Mayor Richard Irvin surveys the crowd of some 400 people who turned out for the July 11 launch of the 605 Innovation District, a City of Aurora technology initiative. (Photo by Jack McCarthy / Chronicle Media)

The state’s second-largest city already has infrastructure in place,  including 137-miles of fiber optic cable. It also has a tech-supportive government.

“Technology is the common denominator for local and global growth,” said Michael Pegues, City of Aurora chief information officer. “The City of Aurora and (investment firm) Smart City Capital have agreed to explore public-private partnership for collaboration and integration of targeted technology objectives to transform Aurora into the nation’s first, true Smart City.”

Irvin said the initiative would have impact far beyond Aurora.

“We mark a new milestone in the history of Aurora, one that will benefit Aurora for generations to come,” he said. “While we do this as one municipality, we don’t do it alone or in isolation. What we do here will have direct impact on the Fox Valley region, the greater Chicagoland area and this state of Illinois.”