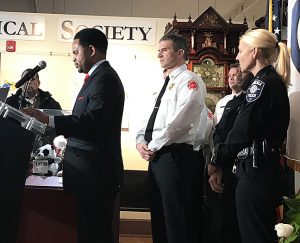 It’s been a year since a workplace shooting at the Henry Pratt Co. in Aurora claimed five lives, but to many city officials and first responders the memories of the horrific events have not faded.

Most importantly are the five victims killed on Feb. 15, 2019 along with five Aurora police officers injured trying to stop the shooter and protect others.

City officials — including Mayor Richard Irvin, Police Chief Kristen Ziman and Fire Chief Gary Krienitz — spoke at a media briefing at the downtown David Pierce Art and History Center on Tuesday, Feb. 11 surrounded by reminders of the shootings and the unified community response.

“On the afternoon of Feb. 15 (2019), the lights were dimmed, darkened and some cases, sadly, extinguished in one of the worst days in our city’s history,” Irvin said.

“We stand here today not simply to recount what happened, but to remember our triumph over tragedy,” Irvin added. “Over the past year, we have worked collectively to turn hurt into hope and pain into progress … This community has pulled light out of darkness.”

The victims on that day included: Clayton Parks, a human resources manager from Elgin; Trevor Wehner, a Northern Illinois University student on the first day of his internship; Russell Beyer, a 20-year Pratt Co. veteran and mold operator from Yorkville; Vicente Juarez, a stock room attendant and forklift operator from Oswego; and Josh Pinkard, the plant manager who lived with his family in Oswego.

The fatal shootings occurred on what had otherwise been a routine afternoon at the company and surrounding neighborhood. Classes were underway at nearby Aurora University, the John C. Dunham STEM School and Holy Angels Catholic School, and people in the immediate area otherwise went about their business.

“The call came in of a mass shooting and it was one of those surreal moments where I wasn’t quite sure what I was hearing over the radio,” Ziman said. “As we were on the way to the scene — in what seems like a moment that would last forever in time — I was listening one-by-one to my officers getting shot. I don’t quite know how to describe that experience. (But) I knew once we got there we had a job to do.”

Other Aurora police and fire personnel also dashed to the scene while first responders from neighboring communities and even some from miles away began to arrive and assist.

The gunman, identified as 45-year-old Gary Martin, was being dismissed from his job at Pratt when he reportedly opened fire in a meeting. He later died in a shootout with police. 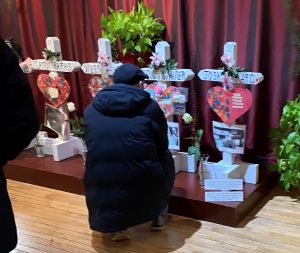 A visitor stops by the memorial at the Pierce Art and History Center, 20 E. Downer Place, honoring the five people killed in the Pratt factory shooting on Feb. 15, 2019. (Photo courtesy of the Aurora Historical Society)

“There was a bright light that showed through the dark cloud in the face of danger and death,” said Irvin. “Heroes emerged, not with capes (but) with uniforms. We are forever grateful to the fine women and men of the Aurora Police Department, the Aurora Fire Department and all the responding public safety officials that came in from miles around to serve and protect.”

Two of the injured police officers have returned to duty, one retired and two others continue their recovery and rehabilitation.

Lessons were learned and procedures have improved in the aftermath of the shootings, according to city officials. But there’s also the lamentable distinction that Aurora has joined the roll call of American communities victimized by gun violence.

“One thing that I have learned over this past year is that real human beings were walking the earth and are no longer with us,” Ziman said. “The pain that these families are feeling doesn’t feel like a year. It feels like they are stuck in that moment in time. I never want to forget them. I had the honor of going to the State of the Union (in Washington, D.C. Feb. 4) and I have their names in my pocket close to my heart. Every day I think of them.”

The community also responded. An Aurora Strong fundraising campaign collected more than $500,000 to aid families of the victims.

No formal city observance is planned on Feb. 15 beyond flags flying at half-staff. The Pratt Co. reportedly plans an internal event and police will observe their own moment of silence and remembrance.

Irvin encouraged community members to visit the memorial exhibit at the Pierce Center, 20 E. Downer. The exhibit is open from noon-4 p.m. on Wednesdays-Saturdays through Feb. 29.

The exhibit includes five wooden crosses featuring names of the victims and donated to the Aurora Historical Society along with a selection of candles, stuffed animals, signs and other memorabilia left outside the factory. The Aurora Police Department also contributed cards, notes and items sent to them.