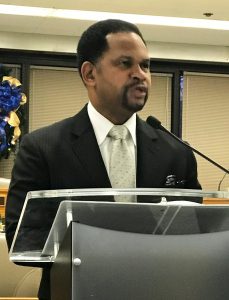 “If you know something, say something,” a somber Irvin said at the start of a City Hall media briefing on Tuesday, Dec. 3. “There are community members who have information that can help us solve these cases and possibly prevent future tragedies by getting violent actors off the streets and getting them the help they need.”

Aurora Police continue to investigate the Dec. 1 death of 20-year-old Juanya Booker and injuries to four other young people on the near East Side as well as the Nov. 24 fatal shooting of 15-year-old Jasmine Noble on Aurora’s near West Side.

Irvin declined to discuss specifics of either investigation and an Aurora Police spokesman was not immediately available with any updates. As of Tuesday, police had not announced any arrests or charges.

The Aurora mayor offered his sympathies to the families of the victims.

“I extend my heartfelt condolences to their parents, family members and friends,” he said. “Not only as mayor, but also as a parent of a teenager and a young adult. I hurt over their loss, two young lives cut short due to senseless violence.”

Irvin also pledged efforts to reach out to young people to head off possible future tragedies through mentoring and providing positive role models.

“I know that some of these shootings could have been prevented through effective prevention and mentoring and providing the youth with better tools for decision-making and measuring the mental health of our young people in need.

“We will put a renewed focus on mentoring in our community,” Irvin said. “My team will spend the rest of this month compiling information for a citywide mentoring initiative that will commence in January.”

In the Dec. 1 incident, police responded to 911 calls at around 2:30 a.m. reporting shots fired and then reports of a person shot in the 700 block of Fifth Street. Police found three adult victims suffering from gunshot wounds and one was pronounced dead at an area hospital.

Police said two other persons arrived at the hospital suffering from gunshot wounds from the same incident.

On Nov. 24, police responding to 911 reports found a female shot inside a house on the 400 block of Florida Avenue. The 15-year-old woman, later identified as Jasmine Noble, was pronounced dead at the scene.

In a separate incident, police continue to investigate the shooting of a 31-year-old man on Thanksgiving. He suffered multiple gunshot wounds and was transported to a local hospital by Aurora paramedics.

Anyone with any information on any case should call the Aurora Police Department’s Investigations Division at 630-256-5500 or call Crime Stoppers at 630-892-1000 to leave information anonymously.