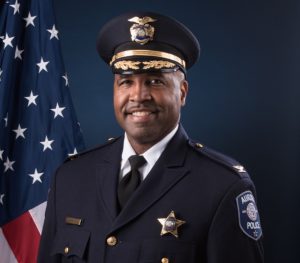 Irvin made the announcement at a Wednesday, July 14 press conference.

Cross, who will become the city’s first Black chief of police, succeeds Kristen Ziman, who was the first woman to hold the job.

Ziman announced in June her plans to retire from the force after 30 years, the last five serving as chief.  Her last day on the job will be Aug. 6.

Cross began his career with the Aurora Police in April 1994 after a short stint with the Milwaukee Police Department. In Aurora, he’s worked in patrol, community policing, special operations, field training, central services, and is a former school resource officer.

Cross is the president of the Northern Illinois Chapter of the National Organization of Black Law Enforcement Executives; and graduated from the Executive Strategic Management program at the Senior Management Institute for Police at Boston University.
Cross was promoted to sergeant in 2005, lieutenant in 2008, commander in January 2016 and deputy chief in 2020.

Cross’ promotion to lead the department comes one year after the city adopted a police reform plan in wake of the death of George Floyd May 25, 2020 at the hands of Minneapolis police.

The program is known as CHANGE or Community Helping Aurora’s Necessary Growth and Empowerment, and is intended to focus on strengthening police accountability. It includes a review of the department’s use-of-force policy and police training methods as well as measures to equip officers with body cameras.

At the time of its adoption in June 2020, Irvin told the city council there is “work to do” in terms of addressing racism and injustice on a local level.

At the July 14 press conference, Irvin praised Ziman for her professionalism over her 30 years of service and especially her leadership as chief.  including the department’s handling of the February 2019 shootings at the Pratt company that left five people dead.

Irvin called Ziman a “persona friend” and said she will be officially honored for her service at the next city council meeting.

He is a 1987 graduate of East Aurora High School, earned his associates degree in general studies from Waubonsee Community College in 1989 and a bachelor’s of science degree in political science from Bemidji State University in 1992.