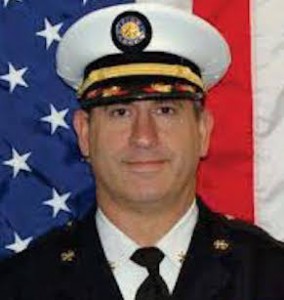 If approved by the City Council, Krienitz would succeed John Lehman, who recently announced his retirement.

Weisner made the decision after an extensive internal selection process that included peer surveys, management evaluations and multiple rounds of interviews, according to the city. Weisner made his recommendation from among six internal candidates.

“I’m very pleased to recommend Gary as our next chief,” Weisner said. “His natural leadership qualities, combined with his considerable experience and training, make him a solid choice for chief. Gary’s strong record of volunteerism will help to carry on the tradition of the fire chief being an integral part of the Aurora community.”

Serving in the department for 19 years, Krienitz began as a paramedic before being promoted to Lieutenant and then Captain. In April 2015, he was appointed as Aurora’s Fire Marshal.

“When I was in high school at Waubonsie Valley, a friend gave me an opportunity to ride with Medic 4 at Fire Station 4,” he said. “Little did I know that brief ride-a-long would have such an impact on who I would become. Now to be considered for the position as the next Chief of the Aurora Fire Department is such a great honor.”

Weisner’s recommendation was scheduled to be considered by the City Council on Tuesday at a Special Committee of the Whole Meeting and a full City Council vote later in the evening.

Lehman will continue to serve as Fire Chief through his scheduled retirement date in February, at which time the new Fire Chief will be officially sworn in.

A graduate of Waubonsie Valley High School, Krienitz served 11 years as a paramedic after joining the department in 1997.

In 2014, Krienitz was named Firefighter of the Year.  Along with Private Jason Larson and Private Dan Murphy, he earned the department’s top award for their stalwart efforts in a dangerous motel fire that resulted in putting themselves in harm’s way and saving the lives of two people.

He has completed more than 50 training courses through the U.S. Department of Homeland Security, the Illinois Fire Service Institute, the Illinois State Police Academy for Arson and the Bureau of Alcohol, Tobacco and Firearms.  Krienitz earned his Fire Science degree from the College of DuPage and was a Team Leader with the DuPage County Fire Investigation Task Force.

A dedicated community volunteer, Krienitz mentors youth at Calvary Church, teaches Junior Achievement classes at local schools, and has put his extensive training and expertise to use with medical missions in Guatemala, Cambodia, the Philippines, Brazil, Bosnia, Belgium, Slovakia and Ethiopia.

He resides in Plainfield with his wife Stephanie, and their children Claire and Kevin. They’ll be moving to Aurora within one year.

“You know when you have that feeling when something is just right? That’s how I felt first entering a career in fire service and that feeling is even greater all these years later,” said Krienitz. “Building on foundation laid by Chief Lehman, the Aurora Fire Department has the right tools needed to continue to improve and be the best. I look forward to working with my team to develop short-term and long-term goals that are realistic yet innovative, aggressive and efficient.”