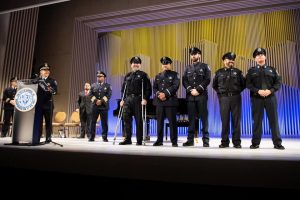 Aurora police and city officials Monday, April 29 honored 52 members of their Police Department, including the five officers who were wounded, for their actions during and after the mass shooting at the Henry Pratt Co.

During a ceremony at the Paramount Theater, Aurora officers were lauded for their actions in the wake of the Feb. 15 factory shooting that took the lives of five employees of the Pratt Co.

The officers were awarded the Blue Star Award, the highest honor of the Aurora Police Department.

The Aurora Strong effort has raised more than $500,000, including $6 from a girl who showed up at Mayor Richard C. Irvin’s office with money from her piggy bank, according to Clayton Muhammad, the city’s director of communications. The gofundme account, controlled by the city, is being used to help families affected by the shooting.

Irvin said members of the Police Department did amazing work when “the city was gripped with fear and uncertainty.”

“They stood up when they had every right to stand down,” Irvin said.

Scott Hall, president and CEO of Mueller Water Products, parent company of the Henry Pratt Co., said Feb. 15 was the worst day in the company’s history “not just because we lost five family members, but we all lost a little bit of our innocence.” 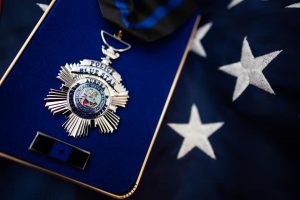 Hall said he realized in the days after the shooting that if not for the swift and heroic acts of the Aurora Police Department the death toll “could have been 15 or 20.”

State Rep. Keith Wheeler (R-Oswego), whose 50th District includes Aurora, said the officers should be proud of their acts of valor.

“You showed us what real heroes look like,” Wheeler said. “… You have our full respect and undying gratitude.”

Police Chief Kristen Ziman choked up when on stage with the five officers injured in the shooting.

Officer John Cebulski attended the ceremony using a crutch and with a brace on his right knee.  Cebulski was shot while on the second floor of the Pratt building. He said he was about 30 feet from the gunman when shot in the knee.

After the ceremony, he said people tell him he’s a hero.