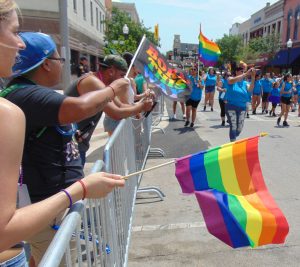 They came waving rainbow flags and wearing them. Blowing bubbles, giving hugs and celebrating pride in themselves and their community.

Aurora’s first Pride Parade went off without a hitch on Sunday afternoon, drawing crowds of children, families and and staunch supporters of the LGBTQ community, despite a heat index topping more than 100 degrees.

“I think we should all have our own parade and a day to be ourselves,” said Alysa Miller, of Aurora, who showed up with friends to witness the fanfare and take part in the historic event. “This is our day.”

With a painted face and a flag draped around her shoulders, Miller was of many who dressed to impress. There were colorful tutus and dogs sporting rainbow-colored fur. There were leis wrapped around necks and unicorn horns atop heads as a sea of color and love filled the streets.

Joe Rodriguez of Aurora found a shady spot as he waited for the parade to begin. He happily took in the sight of change and acceptance happening in his own community. 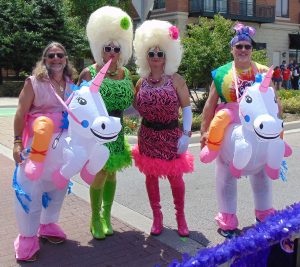 “I think this will continue to grow and grow,” he said of the crowd size. “Aurora is the second largest city in Illinois. Everything takes time.”

He spoke of the pride he has in Aurora’s leaders who came together to make the parade possible for the first time in history.

Rodriguez praised Mayor Richard Irvin for his part in making the pride parade a reality.

“Honestly, I believe a big part of this has to do with him,” he said.

Irvin braved the humidity and head as he walked to street with parade participants. He shook hands and gave smiles, appearing proud to be involved.

State Rep. Stephanie Kifowit and Gov. Bruce Rauner were among the elected officials present, along with local businesses, churches and organizations who came to celebrate love and pride.

“It’s almost like being in Chicago,” Rodriguez happily said.

And, while love filled the air, there were several in attendance on Sunday that were on a different mission. With protest signs and chants of their own, several protesters walked through the streets making sure to get their point heard.

Instead, they were greeted with “boos” and requests to simply move along. 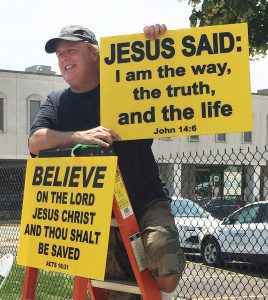 One Pride Parade onlooker expressed his opposition to last Sunday’s parade, proclaiming that lesbians and gays would “go to hell”. (Photo by Jack McCarthy / Chronicle Media)

Stanley came to support her own daughter on Sunday, and, like others, said she wasn’t in the mood to deal with any hate.

“My daughter wanted to come and I support her 100 percent,” Stanley said. “I want this to be a peaceful day without ignorance.”

And, for the most part it was.

It was a day filled with love, and one they city will surely not forget.

—- Aurora praised for hosting its first Pride Parade: ‘This is our day’ —