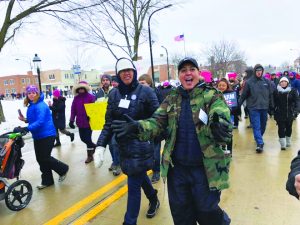 A west suburban state representative has been chosen to lead the Illinois Department of Veterans Affairs.

“The Illinois Department of Veterans Affairs has faced numerous challenges, and it’s a priority for my administration to ensure that our veterans are treated with dignity and get the care and opportunities they deserve,” Pritzker said. “Representative Chapa LaVia is a steadfast advocate and effective change-maker, and I appreciate her willingness to continue to serve.”

“As a veteran, I’m honored to step up and serve all the men and women who have served our nation,” said Chapa LaVia, a former member of the Army and Illinois Army National Guard. “Illinois has much work to do to live up to our responsibilities to our veterans, and I am deeply committed to making Illinois the best state in the nation to be a veteran.”

Chapa LaVia replaces retired Lt. Col Jamie Martinez, the executive director of Illinois Joining Forces, who asked the administration to remove his name from consideration as director of the Illinois Department of Veterans Affairs after being nominated for the post earlier in February.

“I appreciate Jaime Martinez’s dedicated and honorable service to our nation and to Illinois over many years and know that he will remain a champion for veterans and their families” Pritzker said.

“I have asked Governor Pritzker to remove me from consideration for director at this time and want to personally thank him for his confidence in my leadership abilities and experience,” Martinez said. “This decision has not been made in haste, for those who know me know I have always strived to serve my country and my state without recourse and will continue to follow that mission. I applaud the governor for his leadership and for prioritizing the quality of life and safety for all veterans and their families in Illinois.”

Chapa LaVia was first elected to the Illinois House of Representatives in 2002, becoming the first Latino elected to the General Assembly from outside Cook County. When she was elected, she resigned her commission in the National Guard. Chapa LaVia was born and raised in Aurora. She graduated from East Aurora High School and then went on to become the first in her family to graduate from college.

She joined the state House’s Veterans Affairs Committee in 2003. Two years later, she was promoted to vice chair of the committee and since 2009 has served as the committee’s chair. Chapa LaVia is a member of the Roosevelt-Aurora American Legion Post 84 and the Military Officers Association of America.

Chapa LaVia lives in Aurora with her husband, Vernon, a veteran of the U.S Navy; and her two teenage daughters.

The director position’s salary ranges from $66,466 to $76,525, according to paysa, a salary-monitoring website.

She has introduced dozen of bills to help military veterans and their families. Chapa LaVia helped create the Vet-Cash lottery ticket which has raised more than $14 million for veterans organizations and the Veteran Suicide Task Force, expanded homestead exemptions for veterans and opportunities for veteran-owned small businesses, and worked to ease the transition for active military members returning to civilian life in Illinois.