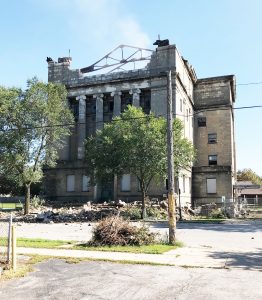 Portions of metal roof support beams are visible at the top of the former Masonic Temple that was damaged in a fire that started on Monday night and went through much of Tuesday before it was finally brought under control. (Photo by Jack McCarthy / Chronicle Media)

“After nearly 100 years, the Masonic Temple has seen its final day,” said Aurora Mayor Richard Irvin during a Tuesday afternoon City Hall press conference. “We’re an old city — 180 years old — and we have a number of structures that are that age or older. To lose one in that manor affects us greatly.”

Light smoke continued to rise and drift around the six-story structure, located on the southeast corner of Benton Street and Lincoln Avenue some 17 hours after firefighters began to battle the three-alarm blaze.

No one was killed or injured and fire officials said they exercised extreme caution with personnel. They kept firefighters off the roof and limited them to aiming high-pressure streams of water from street level or via ladder trucks.

Despite the lengthy fight involving 35 firefighters and three ladder units, the nearly 100-year-old building could not be saved. It will be demolished following an investigation to determine the cause of the blaze.

No reason was immediately established and officials declined to speculate until a thorough probe could be conducted. 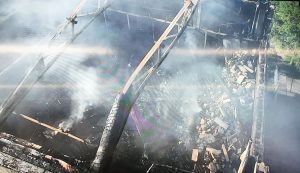 Aerial drone footage from above the Aurora Masonic Temple shows the extent of damage and continuing fires on Monday morning before firefighters extinguished remaining flames. (City of Aurora photo)

The City of Aurora quickly contacted demolition firms on Tuesday, Oct. 8 to knock down the structure and conduct a tricky cleanup on a site that could contain asbestos.

Lincoln and Benton were fenced off and will be closed for the duration. One family living adjacent to the Masonic Temple temporarily left their home but other neighbors were unaffected.

When the temple first opened in the 1920s, it served as a social center for some 1,000 members of the Aurora Masons. It was later used as office and activity space for non-profits and then as the Lincoln Manor Banquet and Conference Center.

The structure, listed on the National Register of Historic Places in 1982, has been vacant for around a decade except for thrill seekers breaking in.

The most recent entry occurred on Sunday when a photographer recorded interior images and posted them on an Aurora-focused Facebook page.