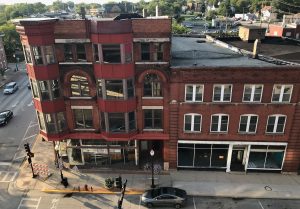 An overview of the Hobbs Building and adjacent structures that will be part of a $13 million redevelopment plan. (Photo by Jack McCarthy / Chronicle Media)

“This building saw some hard times, I’m surprised that it’s still standing,” said Aurora Mayor Richard Irvin last week. “With the last polar vortex, the building was affected greatly. Had it gone through one more winter without being shored up and starting the process of being redeveloped, it would have fallen down.”

Instead, the four-story, red brick structure at the northwest corner of Galena Blvd. and River St. has a new lease on life thanks to a $13 million development plan recently approved by the Aurora City Council.

According to the City of Aurora web site, the Hobbs Building was built as a furniture story and loft building in 1892.

“The Romanesque Revival building “features an onion dome, intricate brick detailing in the semicircular arches over the third story windows, and decorative pressed metal on the piers,”according to building highlights posted on the web site.

Irvin calls the Hobbs revival the last piece in redeveloping and repurposing downtown high-rise and office buildings, many long vacant.

“The Hobbs was the last of all those large empty structures sitting in the city,” Irvin said. “That’s been empty for 40 years.” 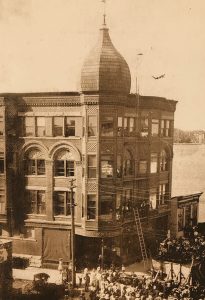 A view of the Hobbs Building from early in the 1900s — complete with iconic onion dome — in this image from a plaque in downtown Aurora. (Aurora Historical Society photo)

The city assumed Hobbs Building custody in 2016 when the previous owner offered to donate the building as an alternative to making continued repairs. The onion dome was deemed to be unstable and removed.

“It had been sitting empty and deteriorating for so many years that the owner of the building, instead of paying the fines that had been assessed for the deterioration and not being looked after … they gave us the building,” Irvin said. “We got it for $1.”