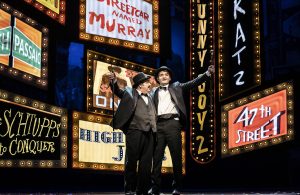 Blake Hammond (left) plays Max Bialystock and Jake Morrissy is Leo Bloom in “The Producers” in the Paramount Theatre’s production.

Two Paramount productions were the most-nominated shows across all categories, with The Producers receiving nine nominations overall, and The Wizard of Oz flying away with seven.

Paramount’s total of 16 nominations was just one shy of Chicago’s Porchlight Music Theatre, which earned the most nominations.

Jeff Award winners will be announced Oct. 21. To see the full list of nominees, visit jeffawards.org.

“The Wizard of Oz” – 7 nominations

“Paramount tallied an impressive list of nods to production, direction, choreography, design and performance,” Artistic Director Jim Corti posted on his blog.”It’s so great to have so many of our supremely talented contributors, artists and technicians acknowledged for our collaborations onstage last season. Our audience shares in the excitement every year and indeed we have much to take pride in and be thankful for.”

“Paramount is producing the very best large-scale musicals in the entire Chicago area,” he said. “This is our fifth consecutive year for multiple nominations, which we see as strong recognition for the work being produced on our beautiful stage by our incredible theater artists both on stage and behind the scenes.”

Paramount 2019-20 Broadway Series is now under way with Disney’s Newsies, the rousing, David versus Goliath, Disney family musical about newsboys who take on a greedy news tycoon. It runs through Oct. 20.