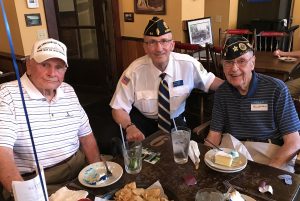 The longtime veterans’ group observed the national organization’s 100th birthday with a low-key downtown event.  But they also — with considerable justification — marked their own post’s centennial and their struggles, survival and revival.

Local Legionnaires  — including some World War II veterans in their 90s — joined family, supporters and friends at the Ballydoyle Irish Pub last Wednesday afternoon to commemorate the March 1919 founding of the American Legion in Paris.

The timing coincided with another major historic event — the 75th anniversary of the D-Day invasion in Europe that ultimately led to defeat of Nazi Germany.

“Many years ago Post 84 in Aurora probably enjoyed 1,500 members,” Eckburg said. “Ten years ago it was probably down to 100 and since that time we’ve been fortunate enough to rebuild it back up to about 325.”

State Rep. Stephanie Kifowit (D-Oswego) is a rarity, a relatively young member and a female.

“(But) it’s been great,” she said. “It’s fun to hear the stories and (experience) the camaraderie. Being a part of something that’s 100 years old is really great.”

The Aurora post is named for Quentin Roosevelt, the youngest son of President Theodore Roosevelt. Quentin Roosevelt died in aerial combat over France during World War I, the only son of a U.S. president ever to die in combat.

The national American Legion was founded in March 1919 in Paris by American military personnel stationed there.  Peak membership was reported at 3.3 million in 1946. Current national membership is about 2 million.

The Legion is not just a social club.  It has helped lobby for benefits for veterans of the nation’s various wars and acts as a clearinghouse for services and support.

“We need to reach out and connect with the younger generation of veterans and have them understand what a value the American Legion is for them, and resource and what we can do to help them,” Kifowit said. “They don’t have to struggle alone, they don’t have to feel they’re alone.”

To that end, the post has reached out to veterans at Aurora University and Waubonsee Community College and also offers scholarships to vets.

“We provide a lot of continuous support,” Eckburg said.  “I see potential for continued growth.”