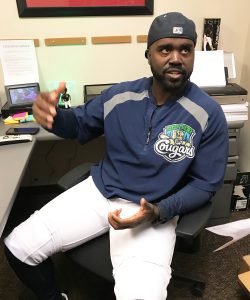 Fickle April weather notwithstanding — several inches of snow followed by 70-degree temperatures — minor league baseball has returned for another season in the far western suburbs.

The Kane County Cougars opened their 29th season in Geneva on April 4 with some tweaks to food and beverage menus and protective netting covering more territory in front of seats at Northwestern Medicine Field.

There really wasn’t a need for the Cougars — one of the nation’s most successful minor league baseball teams — to alter a formula that has proven wildly successful.

That’s partly due to a family friendly slate of firework nights, concerts, giveaways and other attractions and distractions at the park, located at 34W002 Cherry Lane in Geneva.

But it all starts with baseball.

The Cougars are the Class A affiliate of the National League Arizona Diamondbacks and the only minor league team in the Chicago area with a major league affiliation.

Class A is the first rung in a ladder to baseball’s big leagues. Only a handful of players complete that trek, including 173 former Kane County Cougars.

THE SEASON — The home season began April 4 and continues through Sept. 2.

Next up for the Cougars is a four-game homestand, which opens on April 25 against Cedar Rapids.

ON THE FIELD — New manager Vince Harrison is the 20th manager in team history. But he’s quite familiar with the organization after service as hitting coach in 2015. Harrison is the older brother of current MLB outfielder Josh Harrison and spent five seasons playing in the minor leagues. Kane County’s initial roster included four players who spent time with the 2018 team — Franklyn Soriano, Jose Herrera, Eduardo Diaz and Tra Holmes — which finished 72-66 overall, but missed the eight-team playoffs.

LOCAL CONNECTIONS — This year’s roster has two players from the Chicago area. Ryan Weiss, a South Elgin native, who attended South Elgin High School before committing to Wright State University. Alek Thomas is a Chicago-Mount Carmel graduate and was a 2018 second-round draft pick by the Diamondbacks. His father, Allen, is the Chicago White Sox director of conditioning.

IN THE STANDS — Tickets are $15 for box seats, $13 for reserved and $9 for the lawn seating. It costs $10 to park. Seniors get in for half price on Tuesday and active military members and their families are admitted free with presentation of identification. From June-September, all lawn and reserved tickets are $5 on Mondays.

FOOD AND DRINK — Fans can select from extensive menu of food and drink choices and the Cougars offer discounted food and drink on special nights, including half-price premium and craft beers on Mondays; half-price Taco Nights on Tuesdays; $1 prices on select beers, sodas and hot dogs on Thursdays; plus ticket, food and drink packages on Fridays and Saturdays. Some price cuts don’t begin until June.

BIG GIVERS — The Cougars ranked fifth among 160 minor league teams in charitable giving through the 2018 season. They gave more than $1 million through a series of programs last year and are shooting for another $1 million in 2019 through their Million Smiles Campaign. Partial beneficiary of this year’s 50-50 raffle is Aurora Strong Community Fund, created to help support families of employees who died in the Feb. 15 shootings at Aurora’s Henry Pratt facility.

MIDWEST LEAGUE — Kane County is among 16 members of a Class A league that dates back to 1956. It was founded in 1947 as the Illinois State League and was called the Mississippi-Ohio Valley League between 1949-55. The current format divides the league into two divisions and the season is split into two halves. Champions and second-place finishers in each half participate in postseason playoffs.