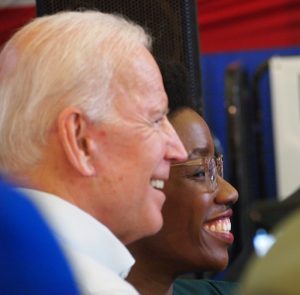 Being in a wheelchair, Logman couldn’t maneuver as easily as others could to get in Biden’s line of sight. However, she was able to get close enough for the former vice president to see her, stop, and spend some time talking with her on Wednesday.

She was able to tell him about her grandson, Benjamin, a first-grader at the French International School in Chicago, who was elected class representative.

“He had a two-point platform: Everyone should have a friend and we all should say ‘I’m sorry,’” Logman said.

“I am a new Democratic precinct committeeman in Aurora,” she said. “I support Lauren Underwood and the party.”

Underwood, who was seen as long shot a few months ago, is in a dead heat with incumbent Republican Randy Hultgren of Plano, according to some polls.

She hoped that Biden’s appearance on her behalf would provide the boost that puts her over the top.

After talking to a bevy of newspaper reporters and television crews following the rally, the Naperville nurse, who has been a candidate less than 18 months, beamed, “I can’t believe it.”

Referring to herself as a “regular person” several times before welcoming Biden to the stage Wednesday afternoon, Underwood said she never envisioned herself a politician although she worked for the Obama administration to craft and pass the Affordable Care Act.

Carrie Jackson of Plainfield said her son Tyler at 18 years of age was diagnosed with a form of cancer. Doctors removed the sarcoma and two-thirds of one of his lungs.

Jackson attended the same Hultgren town hall meeting that Underwood did in April 2017 and heard the Plano congressman promise to make sure pre-existing conditions were covered in any federal health care legislation.

“I felt it was a personal promise,” Jackson said, “… I know Lauren will provide the protection our son has to have.”

Biden, who has dealt with many health-related issues in his family, said people don’t realize the importance of insurance until they find themselves in a tough spot.

“It is just not pre-existing conditions, it is continuing to ensure individual coverage,” Biden said.

He said Republicans can’t say that insurance coverage is not mandatory for everyone and then say pre-existing conditions are covered.

“They are either not telling the truth or they’re really stupid,” Biden said. “You can’t cover pre-existing conditions without everyone being in on the deal. “
Biden said when the administration needed help with the ACA, officials turned to Underwood.

He said this election is more than just deciding on the people who will lead our country.

“Something more is going on this time around,” Biden said. “The very character of our country is on the ballot.”