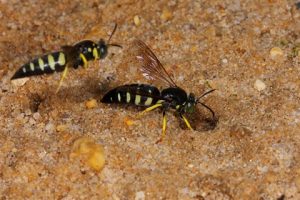 Burrowing Bees, Sand Wasps and Cicada Killers are back for the season.

These important pollinators like to inhabit areas like sand playgrounds and beach volleyball courts, where they often create their in-ground nests, according to the Fox Valley Park District.

These bees and wasps are considered non-aggressive and very unlikely to sting, unless they are stepped on or aggravated, so use caution around these areas, according to Phil Nixon, University of Illinois Extension entomologist.

Burrowing bees are hairy, 1/2-inch-long bees that are usually drab in color, with bands of black and brown or gray. Some species are metallic green or blue. They make individual nests in the ground with 1/4-inch openings, Nixon said.

Often, many individuals nest in the same area; the bees tend to fly about six inches

above the nest. They are very unlikely to sting, according to Nixon. 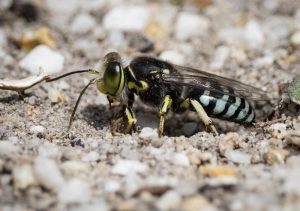 Burrowing bees are excellent pollinators, with some being specific to native plant species.

for their native bee pollinators.

Cicada killers are about 1-1/2 inches long, have reddish transparent wings, and are black with

Sand wasps may be reddish or grayish and up to two inches long. Cicada killers

and sand wasps build individual nests with 1/4- to 1/2-inch entry holes in the soil.

Males usually patrol the air space above the nests and will zoom around passersby, creating a 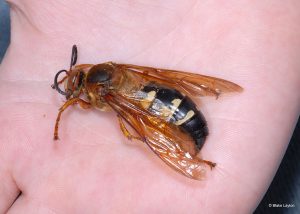 These wasps rarely sting people, although they will sting if stepped on or grabbed.

Cicada killers and sand wasps pollinate plants while feeding on pollen and nectar.