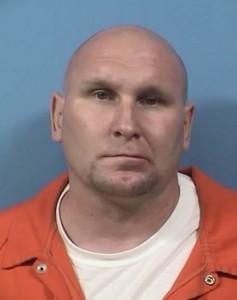 Bond has been set at $300,000 with 10% to apply for a Chicago man accused of stealing more than $50,000 from a professional gambler early yesterday morning. Robert Chencinski, 45, of the 1900 block of Leavitt Street, Chicago, appeared in Bond Court this morning where Judge Robert Miller set bond. Chencinski has been charged with one count of Robbery, a Class 2 Felony.

It is further alleged that a second male, currently unidentified, exited Chencinski’s vehicle and approached the victim’s vehicle. It is further alleged that the two men then beat the victim and stole a total of $51,500 in cash from the victim. The two men then allegedly returned to their vehicle and fled the scene. A witness to the alleged attack called 911 and Naperville Police officers located the vehicle. After a short car chase the two men allegedly abandoned the vehicle in a residential neighborhood in Naperville. After a brief foot chase Chencinski was located hiding in a resident’s back yard. Chencinski’s alleged accomplice has not yet been located.

“The allegations against Mr. Chencinski and his alleged accomplice are simply outrageous,” Berlin said. “The ambush of an innocent man will not be tolerated and will be met with the full force of the law.”

“I am very pleased we were able to apprehend Chencinski and will continue to follow all investigative leads to apprehend his accomplice,” Marshall said.

Anyone with information regarding this incident is asked to contact the Naperville Police Department at (630) 420-6147.

Chencinski’s next court appearance is scheduled for August 24, 2015 in front of Judge Robert Kleeman.

Members of the public are reminded that this complaint contains only charges and is not proof of the defendant’s guilt. A defendant is presumed innocent and is entitled to a fair trial in which it is the government’s burden to prove his or her guilt beyond a reasonable doubt.

— Chicago Man Charged with Stealing More than $50,000 from Professional Gambler —