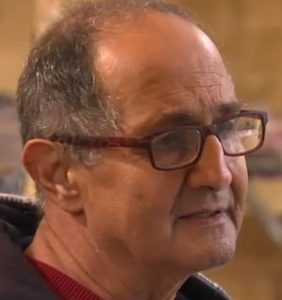 A 69-year-old retired carpenter who created and placed white wooden crosses containing the names of gun victims at the sites of fatal shootings, Zanis died on Monday, May 4 as a result of bladder cancer.

His death came days after friends and family conducted a “living visitation” by driving in a procession past his home on Church Road.

“Mr. Greg Zanis was a giant among men. He was a man of action who simply wanted to honor the lives of others,” Aurora Mayor Ricard C. Irvin said in a statement. “In return, his life was one of honor and one that was celebrated throughout our nation and world. Heeding to the scripture ‘pick up your cross and follow me,’ Mr. Greg Zanis did just that.

“His legacy shall forever be remembered in his hometown of Aurora and around the globe.”

Zanis made his first cross in 1996 to honor his murdered father-in-law. Since then he created as estimated 27,000 more in memory of gunshot victims at Sandy Hook Elementary School in Connecticut, Northern Illinois University, Las Vegas, Parkland, Florida, Chicago and more locations.

Dubbed “The Cross Man,” one of the final creations by Zanis were 2019 memorials to victims in his hometown — five people slain at the Henry Pratt Co. The Pratt crosses were included in an Aurora Historical Society memorial event earlier this year honoring the victims.

Funeral arrangements were not immediately available.