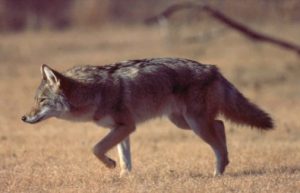 As more and more Illinoisans are fleeing the state, one group of residents is bucking the trend and setting up homes in the suburbs and even downtown Chicago.

Most of us seldom see them and they aren’t of the human variety.

Coyotes were once rare in the region, but now coexist with humans in increasing numbers, according to Stanley D. Gehrt, a professor of wildlife ecology and extension wildlife specialist of the School of Environment and Natural Resources at Ohio State University.

Coyotes have experienced a population growth rate of up to 40 percent and each generation is being raised in closer proximity to humans.

“We kill more coyotes than any other animal,” he said. “So what do they do? They move right next to us. They must have a sense of humor.”

Gehrt spoke last week at the Noon Network meeting of the Fox River Ecosystem Partnership, a nonprofit organization whose goal is to preserve and protect the resources of the Fox River. The session was held at the Max McGraw Wildlife Foundation in East Dundee where Gehrt also services as chair of the Center for Wildlife Research.

Studying coyotes in Chicago’s urban area for the last 17 years, Gehrt said coyotes had been a native of the Midwest and Southwest; however, due to their rapidly expanding populations, “today coyotes can be found as far north as the Arctic Circle.”

And in the last two years, he said “we have found that coyotes also have crossed the Panama Canal.”

By capturing and releasing animals and affixing specialty collars that include a global position system sensor, the study team is able to track coyote movements throughout the Chicagoland area.

As part of the study, more than 1,000 coyotes have been tagged and nearly 500 have radio collars — making it the largest urban study in the world.

Coyotes have been tracked in more than 100,000 locations.

From taking a single whisker from a coyote, Gehrt said, “we can determine its sex, age, diet, and where it lives.”

As the coyote population increased, Gehrt said his team found them moving into smaller and smaller territories — thanks in large part to plentiful food that includes rodents, rabbits and deer.

Only 2 percent of the coyote’s food intake is made up of garbage or human food and only 1 percent is made up of domestic pets, he said. 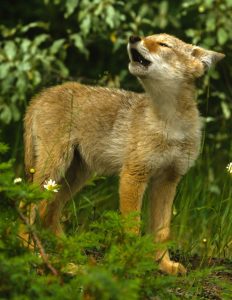 After mating over the winter, spring is time for birth of coyote pups. (123rf photo)

The population increase has also been attributed to the nocturnal nature of coyotes and their monogamy.

As monogamous partners, Gehrt said both the male and the female coyote engage in raising their pups, which in turn spurs their longevity.

As “extremely territorial” animals, Gehrt said, coyotes who were born in dens in the Chicago area have been found up in Wisconsin or farther south.

He said his team has tracked coyotes living along Lake Shore Drive.

One litter of coyotes was raised on top of a parking garage across the street from Soldier Field, Gehrt added.

The “green architecture of the parking structure allows for a double layer of concrete with soil, he said. “The soil openings also create the opportunity for coyotes to create a den in concrete.”

Gehrt noted that coyotes who have chosen to become city dwellers adapt their movements to its dense urban environment, “they use railroads, roads, and highway easements to travel their territories.”

“It advertises to other coyotes that the area is occupied. Coyotes also can count the number of coyotes howling,” he said.

Still Gehrt said, only about 5 percent of the coyotes living in an urban area have registered complaints or conflict.

“The majority of the coyotes are not causing problems,” he said. “A few coyotes have become dog aggressive.”

To avoid a confrontation between your pet and a coyote, Gehrt recommends keeping food away.

“If you don’t have food available most of the time a coyote will move on,” he said.

“(But) dogs sometimes can be the attractant. A dog owner should be present when their pets are outside and if they spot a coyote yell and shoo them off.

“If you have really small dogs and you let them out really late at night, it is best to keep an eye on them,” Gehrt said.

—  Coyotes making themselves quite at home in suburbs, city —