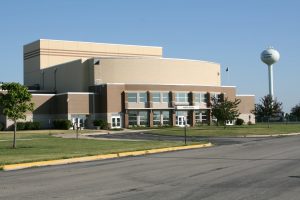 Arthur Stenger, 16, 1900 block of Cambridge Way, Montgomery, and Elijah Vajgert, 16, 42W200 block of Beith Road, Maple Park, were both pronounced dead at the scene of the crash which occurred in unincorporated Virgil Township.

Kane County Sheriff’s Department Deputies were called to reports of a crash with injuries near the intersection of Meredith and Beith roads at around 5 p.m.

Witnesses reported that one of two vehicles was on fire, and that there were live wires down in the roadway.

According to Kane County Sheriff’s Department Lt. Patrick Gengler, preliminary reports indicate that Stenger was driving a 2002 Chevrolet S-10 pickup truck westbound on Beith Road, with Vajgert as his passenger. The vehicle came to a stop sign at the intersection of Meredith Road, stopped, and then continued through the intersection when it was struck by a semi that was traveling south on Meredith Road.

Gengler said the 1979 Peterbuilt semi, which was hauling corn, did not have a stop sign at the intersection.

After the vehicles collided, they rolled over and took out a utility pole and power lines near the intersection, Gengler said.

Both teens were pronounced dead on the scene. The driver of the semi, Jack Krueger, 60, of Burlington, was treated and released at the scene.

On its Facebook page, Kaneland District 302 posted this statement: “It is with great sadness, that the Kaneland School District has shared support information regarding the tragic deaths of two (of) our Kaneland High School students. The loss of anyone in our Kaneland family is always difficult. Please keep these two families in your thoughts and prayers during this extremely difficult time.”

The Kane County Sheriff’s Office and Kane County Accident Reconstruction Team are continuing to investigate this crash. No tickets have been issued.