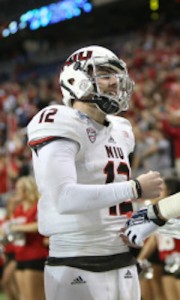 Quarterback Drew Hare is one of 15 starters returning for the defending MAC Champion Huskies. ( Photo: NIU)

The defending league champion Northern Illinois University Huskies, who return 15 starters for 2015, have been picked to finish third in the Mid-American Conference West Division by members of the league’s media in the poll released at last week’s MAC Football Media at Ford Field in Detroit.

NIU, which has won three of the last four MAC Championships and played in five consecutive league title games, garnered 113 points and four first-place votes in the 2015 poll.

“Similar to last year, when someone doesn’t’t think you’re the best, you’re out to prove ‘em wrong,” said NIU Head Coach Rod Carey, who enters his third full season as head coach in 2015 with a 15-1 record in league regular.  “The MAC West is tough every year, we have great teams, great coaches and great venues and every year it’s like fighting your brother.”

NIU opens its 2015 season on Sept. 5 in Huskie Stadium versus UNLV. The game kicks off at 6:30 p.m. and will be broadcast on the CBS Sports Network.

The game is the first of six home contests for the 2015 Huskies, who will also celebrate the 50th Anniversary of Huskie Stadium throughout the year.  The Huskies will also play host to Murray State (Sept. 12), Ball State (Oct. 10), Eastern Michigan (Oct. 24), Western Michigan (Nov. 18) and Ohio (Nov. 24).

The official start of preseason camp is Wednesday, Aug. 5 with the first practice set for the next day.

The Huskies return 47 letter winners, including 2014 All-MAC selections Paris Logan and Andrew Ness, and 2013 All-MAC receiver/returner Tommylee Lewis, back after sitting out the 2014 campaign due to injury.

The 15 returning starters are split evenly among the offense and defense along with kicker Christian Hagan.