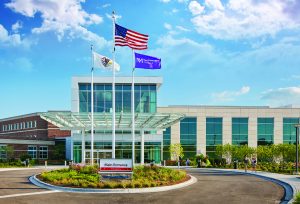 Delnor Hospital where two nurses allegedly were beaten, forced to take off their clothes and held at gunpoint by Tywon M. Salters.

The two nurses alleged they were beaten, forced to take off their clothes and held at gunpoint by Tywon M. Salters, 21, and one nurse alleged she was raped by Salters during a 3½-hour standoff May 13, at the Geneva hospital at 300 Randal Road.

Chicago attorney Sean Murray said in a press conference Thursday that a nurse also was injured when a SWAT team officer from the North Aurora Police killed Salters. The Kane County Sheriff’s office and the office of the Kane County State’s Attorney both had stated the nurses were not injured in the standoff, Murray said.

The incident is currently under investigation by the Illinois State Police Public Integrity Task Force. The officer in charge of Salters and the SWAT team officer are both on leave during the investigation.

The suit alleges that Kane County Sheriff’s officers and hospital security guards slept on a couch, amused themselves on cell phones and watched videos on laptops while supposedly overseeing the custody of inmate Salters. After an unshackled Salters grabbed Loomis’ 9mm service gun, the suit alleges the officer ran away, hid in another hospital room and did not alert hospital staff.

“It was a pattern of conduct with regards to the officers that were supposed to be guarding this inmate that directly led to this incident occurring,” Murray said at the press conference. The nurses’ suit was filed in US. District Court for the Northern District of Illinois against Kane County, Sheriff’s Officer Shawn Loomis and Apex3 Security LLC. The nurses filed the suit under the names Jane Doe I and II.

The suit gives a timeline with more details than have emerged from the initial Kane County Sheriff’s statement.

Salters was first admitted to the hospital emergency room from the Kane County Jail on May 7 after he reportedly ingested hydrogen peroxide, a cleaning fluid. Salters was “combative with the hospital staff and nurses and had to be restrained,” according to the suit.

“[Salters] was known to be a career felony offender,” Murray said. “He was on suicide watch and on two separate occasions he had harmed himself to get out of jail.”

The second hospitalization occurred May 8, when Salters was admitted after swallowing a piece of a plastic jail-issued sandal. During his six days in the hospital, Salters was supposed to be shackled to the hospital bed while in treatment, the lawsuit said. According to the suit, while Salters was being guarded by sheriff’s officers and hospital security guards, nurses observed an officer sleeping on the couch while on guard. They observed officers removing the shackles on Salters so he could use the bathroom.

The morning of May 13, nurses observed a sheriff’s officer “sitting in a recliner and using his personal laptop computer,” while supposedly guarding Salters, the complaint alleges.

At noon, when Loomis arrived for duty, he allegedly removed Salters’ leg shackles, leaving him “free and unrestrained” to use the bathroom. According to the suit, Salters persuaded Loomis to leave the shackles off in case he needed to use the bathroom again. A nurse entered the room and observed Salters “sitting freely, unshackled and unrestrained on the side of the hospital bed” with Loomis sitting on a couch behind the bed, allowing Salters a clear path to the open hospital room door, the suit said. According to the complaint, the nurse asked why Salters was unrestrained and did not receive an answer from Loomis.

Salters grabbed Loomis’ gun around 12:30 p.m. and Loomis “ran from Room 3658 and went into Room 3670, shut the door and hid from the situation,” the complaint alleges.

Salters was naked, walking down the hallway with a gun, Murray said. He went into a nurse’s office and took Jane Doe I hostage. Salters demanded that she take off her clothes “so he could put them on,” Murray said. “He took her car keys and cell phone. He physically restrained her and held her at gunpoint.”

“The second nurse was nothing short of a hero,” Murray said. “She convinced Mr. Salters to let her use the phone to call downstairs and warn other hospital employees.” The nurse used a code to warn other hospital employees and the facility was placed on lockdown. For 3½ hours, Salters held Doe II in a windowless sanitation room with the lights off. Salters allegedly beat Doe II with his gun, raped her and threatened her, telling her she would leave the hospital “in a body bag.”

“It’s definitely a tragic event all the way around and it must have been a horrible situation for the staff and the nurse who was allegedly raped,” said Martin Green, board president of the International Association for Healthcare Security and Safety. “I’m sure every hospital security professional is going to look at this situation and review their plan to make sure it’s up to date.”

Kim Waterman, spokesperson for Northwestern Medicine, did not respond to requests for comment after the lawsuit was filed, but earlier said the hospital system was “doing an internal review and working with the Kane County Sheriff’s Office to do a complete investigation of the incident and see whether protocols or policies need to be changed.”

He said he hoped the Illinois State Police investigation looked beyond the conduct of a sheriff’s officer and widen the investigation to the jail’s treatment of the mentally ill.

“Frankly we need to start thinking of criminal justice system as a system that has not only failed the inmate in this case, but also failed these two nurses,” Mills said.

Efforts by Chronicle Media to reach Salters’ family members for comment were not successful. A woman identifying herself as Veronica Salters, Tywon Salters’ mother, had created a GofundMe crowdfunding site online as of May 26, asking for $6,000 to help with her son’s funeral expenses.