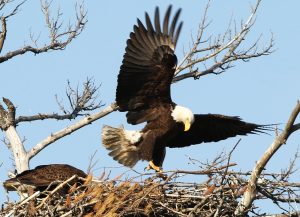 A bald eagle arrives with a meal at a nest last year on the Mooseheart campus. The bird’s mate is at left. (Photo courtesy Darryl Mellema / Mooseheart Child City and School)

A special local dad has stepped up — just in time for Father’s Day.

When a bald eagle mother nesting on the Mooseheart campus was struck and killed by a car on May 29, her partner and father of their eaglets took over responsibility for care and feeding.

“It has been sad,” said Darryl Mellema, associate editor at Moose Magazine and a spokesman for the children’s home. “People may think how do you hit an eagle on the road? It is tragic, but it does happen.  They are scavengers here, and we are in an urban area.  This isn’t the wilds of Alaska where they can swoop down and get salmon.”

The pair had been a social media phenomenon and a decade-long presence that helped attract visitors hoping to catch a glimpse.

The nest, one of two on 1,000-acre campus near Batavia, is near Mooseheart Road on the south edge of the facility.

Bald eagles at Mooseheart and along the nearby Fox River are a relatively recent phenomenon.

Mellema remembers once walking out to a Mooseheart parking lot and was surprised to see an eagle fly overhead.

“I’m part of the generation from back in the 1970’s when we didn’t know if bald eagles were going make it,” he said.

Instead, the species has staged a remarkable comeback.

About 40 years ago, bald eagles were in danger of extinction due to habitat destruction, illegal shooting, and contamination of food sources through the use of DDT according to the U.S. Fish and Wildlife Service.

Thanks to long-term conservation efforts across the United States, bald eagles have made a significant recovery.

Illinois is now home to more than 3,000 bald eagles each winter —more than any state except Alaska, which hosts an estimated 30,000 birds.

Many of the eagle counts stopped after 2007 when the Bald Eagle was taken off a federal  Threatened and Endangered Species list. In 2012, it was estimated that 10,000 nesting pairs of eagles lived in the lower 48 states.

Mellema said the Mooseheart Road location is a onetime hawk nest. The second eagle nest is on the west part of the property near Orchard Road.

“The eagle nests have been a highlight on campus for birdwatchers,” Mellema said.  “Within that community, it has been well known—especially now that we have eaglets and their heads have been popping up over the rim of the nest.”

Eagles mate for life, Mellema said.  “They also co-parent—when one is in the nest the other will go out and get food. Now this eagle has lost its mate,” he said. “It is possible that this eagle will find a new mate.”

Ages of the resident eagles are unknown, although there has been some guesswork.

When they first appeared on campus, “their heads turned” which is an indication that the eagles were about five or six years old, Mellema said.

Since eagles live to about age 25 the remaining male bird could live about 10 more years.

“But we are dealing with a lot of ifs,” Mellema said.  “(And) we don’t know if these are the last eaglets we will have here.”

Mellema says that the “eaglets are naturally at a point where they are going to leave the nest.”