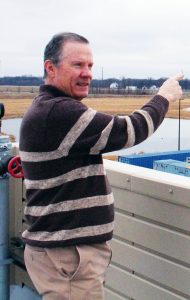 After the terrorist attacks of Sept. 11, 2001, police and fire departments across the country were forced to take a hard look at how well their training prepared them to work together to address large-scale tragedies.

“The fact of the matter is that when we come together on a major incident, we have to work together,” said John Fahy, former Elgin Fire Department chief. “They found that out on 9/11 when New York all came together and firefighters came from New Jersey and outside of the city to help.

“They couldn’t communicate well…they didn’t have a lot of the same processes.”

Before Sept. 11, police and fire departments in the greater Elgin area seldom trained together and when they did it was difficult to coordinate due to a lack of suitable locations in the area.

After years of talks within the Elgin community around how public safety training could be improved, Dr. David Sam, Elgin Community College president, decided to include funding for a training center in a comprehensive plan to upgrade the college’s facilities.

In April of 2009, “[ECC] ran a referendum to upgrade the college and part of that referendum was to build a public safety training center,” Fahy said.

The $178 million referendum passed by a very slim margin and may not have passed at all if it weren’t for the support of local fire and police departments who rallied behind it, he said.

Around $20 million of that money was dedicated to the construction of a public safety training center as part of ECC’s “Facilities Master Plan. The college purchased 120 acres of farmland at 815 Plank Road in Burlington and began building the campus in 2014.

ECC’s Center for Emergency Services opened its doors to its first class of students in the Spring of 2016, according to the campus webpage.

The Center for Emergency Services now includes a main academic building complete with eight classrooms and a community room as well as a large burn tower and fully-functioning “firehouse” where the fire academy goes to train. 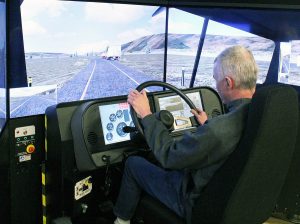 Program Assistant Michael Segreto takes a spin on one of the college’s L3 emergency vehicle driving simulators which allow students to practice driving squad cars, ambulances and fire trucks without ever having to get behind the wheel.
(Photo by Kelli Duncan/for Chronicle Media)

The campus also has two fire trucks, an ambulance and a 139,400 square-foot driving pad, which Fahy said are used frequently by their fire academy and EMT programs.

After serving as Elgin’s Fire Chief for 30 years, Fahy retired and became ECC’s Senior Director of Academic Programming and Public Safety Training in fall of 2016.

“It’s a much less stressful job than being fire chief,” Fahy said. “I had 100,000 people to worry about in Elgin and here I have my students which is about 250 a semester.”

Fahy said his industry connections were helpful in getting the campus up and running and ensuring that local public safety agencies knew they could use the facility for training purposes.

“Academics take priority but public safety training and getting the campus to be used by those who protect all of the people who live in District 509 is an important role for this building,” he said.

Before the facility was built, local fire departments often met in fields or large parking lots for multi-departmental training — areas which are much less conducive to the kinds of drills they would like to run, Fahy said.

Fire chiefs in Hampshire, Burlington and Pingree Grove have told Fahy that they train together more often than ever before now that they have access to the Center for Emergency Services, he said.

Multi-departmental training is vital for police and fire departments that regularly respond to calls together because it helps build trust and improves their ability to work more efficiently to keep the community safe. 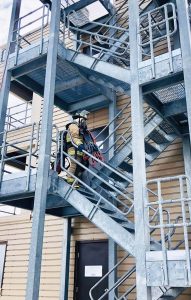 Elgin Community College’s Center for Emergency Services features a burn tower designed to resemble the layout of an apartment building with a second floor balcony and multiple ‘burn rooms’ where fires are set. (Photo by Kelli Duncan/for Chronicle Media)

“They know each other, there’s a personal connection between the first responders of different agencies because they’ve trained here together and they can put a name to the face,” Fahy said.

Lt. Matt Udelhoven of the Elgin Police Department serves as the Commander of the Kane and McHenry County ILEAS Mobile Field Force.

He said the Center for Emergency Services has been a great asset to his team.

“We’ve been out there for the last three or four years for not only ILEAS trainings, but I also run our Elgin drone program,” Udelhoven said. “That’s something that [Fahy] has been very supportive of.”

Elgin is just one of many local agencies that have started drone programs in recent years as a way of increasing efficiency and combat the loss of human resources that can come with budget cuts, Fahy said.

“For someone to search a five-acre field, it would take maybe 40 officers, arm to arm,” Fahy said. “Now, they can put a drone up with a heat detector and, boom, it would see a body or a vehicle that’s giving off heat and everyone could converge on that instantly.”

Also, “anytime you’re not deploying man power you reduce the risk of injury to your team,” he added.

The spacious layout of the Burlington campus is ideal for training his officers on how to use drone technology, Udelhoven said.

“They’ve always had an open door for us and we kind of consider that our home training hub,” he said.

The Center for Emergency Services hosted a non-credit drone class at the campus last year, which Fahy said was well-attended by public safety agencies from around the area.

While Fahy said he is thrilled to see the campus being used in this way, its main purpose is to prepare the next generation of public safety professionals for the line of duty.

Students can also earn a variety of basic vocational certifications so they can begin working while they finish their degree, Fahy said.

Before the campus opened in 2016, students looking to pursue a degree in Fire Science and Safety took their classes at ECC’s main location in Elgin.

Back then, Fahy said the hands-on training portion of degree was more difficult to organize.

“Due to the lack of space, ECC would contract or partner with the local fire departments…and that’s how we got to do some of the things that we do out here,” he said.

Now, students have access to a state-of-the-art facility where they can complete all of their practical training drills.

As part of this training, EMT and fire academy students receive mock 911 calls where they are tasked with responding to a wide variety of simulated accidents and fires, Fahy said.

Fire academy students are also tested on their ability to use Self-Contained Breathing Apparatuses (SCBA), which they must wear in the field to protect their lungs from smoke and heat, Fahy said.

“Our students come in and they really have never done it before, they’re ‘green’ as we call them,” he said. “They’ll suck down a bottle of air that’s supposed to last 45 minutes in about 15.”

The students are taught to remain calm and control their breathing all while engaging in strenuous physical activity similar to what they will have to do in the line of duty, Fahy said.

Perhaps the most important of the drills are the live burns done in the college’s three-story burn tower outside, he said.

One side of the burn tower is designed to resemble the layout of an apartment building with a second floor balcony and multiple ‘burn rooms’ where fires are set, Fahy said.

“The fire engine will pull up and they’ll all get off,” he said. “They’ll have to stretch their line upstairs, get a water supply, force their way in the door and then find the fire, the seed of the fire, and knock it down.”

The route that students must take to find the fire has been set up with furniture and debris to simulate real-life obstacles, Fahy said.

“All of our training is designed to prepare them for the reality of the jobs they will go into,” he said.

Students also have access to two L3 emergency vehicle driving simulators which allow them to experience what it’s like to drive a squad car, an ambulance or a fire truck without ever getting behind the wheel, Program Assistant Michael Segreto said.

Segreto is the resident expert on the two machines after completing a week-long training course on how to operate them.

One machine is set up for fire vehicles and semi trucks and the other can be used to simulate police squad cars or ambulances, Segreto said.

“These simulators also have all the features of a police car or a fire vehicle — sirens, horns, just about everything,” he said. “So it gives them the opportunity to basically be on the job without being on the job.”

Segreto can program the machines to simulate different scenarios that students must respond to without committing any traffic violations, he said.

“[In] most of the scenarios for the fire vehicles, you’ve received a call that there’s a blaze somewhere and you need to navigate from the station to the fire scene,” he said.

The machines are a great way to learn because students can get a feel for driving an emergency vehicle without risking any harm to themselves or the vehicles, Segreto said.

The fire academy’s most recent graduating class was the largest and most inclusive class yet with 24 graduates, three of them women, Fahy said.

One of his goals for the future is to remove any potential barriers to accessing the program for students who may be interested in pursuing careers in public safety, Fahy said.

One such barrier that Fahy and his team are looking into is transportation.

The Burlington campus is about a 20-minute from the main Elgin campus and cannot be reached by public transit, he said.

“For students that don’t have a car, that can make coming to our campus very difficult,” Fahy said.

“The whole no-public-transportation thing throws some challenges into making sure that students can get financial aid because we have to meet certain requirements that everybody can get to [the campus],” he said.

The Center for Emergency Services is also working to offer more of ECC’s general education classes so that students don’t have to commute as frequently between the two campuses, he said.

Over the next five years or so, ECC’s criminal justice program will transition to holding all of its classes at the Center for Emergency Services as well, he said.

Fahy said he is proud of how far the campus has come in just four years and looks forward to being a part of its future.

“The campus will continue to grow for sure,” Fahy said.