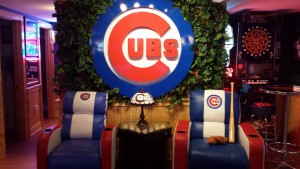 It’s a sign that thousands of people have taken pictures in front of at Wrigley Field and one of those team logo signs now hangs in Stewart McVicar’s Club 400. (Photo by Paul Johnson for Chronicle Media)

Ever since he was a child, the Stewart McVicar had a vision in his head of a Cubs man cave when he owned a home.

He and his wife, Lisa, were looking for houses years back and while Lisa was upstairs checking out the rest of the house, Stewart would be in the unfinished basement, wondering if it could house the den idea he held in his mind.

“From day one when we moved into this place, I was thinking about the man cave,” McVicar said.

Before it was even finished, MLB Fan Cave web site chose McVicar’s place in his northwest suburban home to be its ultimate man cave. By August 2013, Club 400, as it’s dubbed, became a reality.

Equipped with a full bar (shaped in a Cubs’ C of course), TVs everywhere you could imagine (even in the bathrooms), a commercial-quality lighting and sound system, bricks from the same lot the Cubs used during their renovation, an arcade and enough Cubs heirlooms to furnish a museum, Club 400 has become ubiquitous as the Cubs advanced to the National League Championship Series against the Mets.

McVicar hosted a party for the Cubs’ 4-0 win over the Pirates in the Wild Card game, and CBS 2 had a camera crew stationed at his house for nine hours to document the action. At Wrigley Field, other fans now recognize McVicar.

“It’s been crazy,” McVicar said. “I knew I had something special. It turned into a media frenzy.”

Behind all of the technology and notoriety, however, is the actual treasure trove of memorabilia that McVicar has amassed. McVicar started collecting Cubs memorabilia when he was 8 years old — and he’s still collecting.

“I figure, they’re only going to be rookies once,” he said. 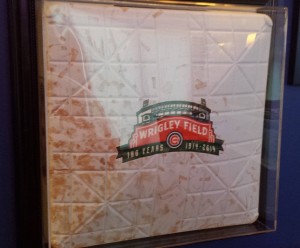 Banks, Andre Dawson, Fergie Jenkins, Ryne Sandberg, Ron Santo and Billy Williams and two of his favorite players, Sammy Sosa and Kerry Wood. Wood hosted an event at Club 400 for his Wood Family Foundation in August and wrote on the wall next to his jersey “best time ever.”

He has some artifacts that people just can’t get their hands on. The centerpiece is a giant Cubs logo that used to hang outside of Wrigley Field next to the administration offices behind the Ernie Banks statue. It gets replaced on occasion. Of course, McVicar has one, the first thing that pops out when you enter Club 400.

“I found it on Craigslist,” McVicar recalled. “That wall was already done. But I had a vision; that would be the centerpiece.” 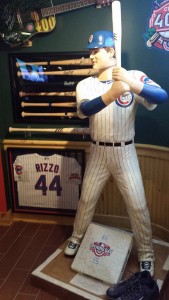 After attending a party at Club 400, Cubs owner Tom Ricketts commissioned this life size Bobblehead of All-Star first basemen Anthony Rizzo and sent it to Club 400. It is the only one of its kind. (Photo by Paul Johnson for Chronicle Media)

After attending a party at Club 400, Cubs owner Tom Ricketts had a 6-foot tall bobblehead of Anthony Rizzo made and sent to his house, the only one of its kind. It is accented by an autographed base, cleats and jersey from Rizzo.

McVicar has a game-used base from the Cubs’ 100th anniversary game in 2014. “It wasn’t sold to the public,” McVicar notes.

McVicar has several favorite pieces, among them a ball from a 1918 game between the Cubs and Giants, a bat from former second baseman Glenn Beckert that is repaired with small nails, as was customary in those days, and a scorecard from the day he was born. He also has in his possession the Cubs’ lineup card that hung in the dugout on the day he and Lisa were married, the ticket stub from his first-ever Cubs game, and an actual locker from the Wrigley Field clubhouse.

“A lot of the pieces have a memory behind them, a story behind them,” McVicar said. “When you collect things since your were 8 years old, that’s the easy part. I was never really into anything else other than Cubs baseball.”

–Fan builds a den of devotion to the Cubs–