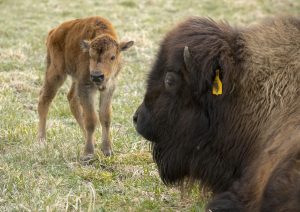 Spring is birthing season for resident bison at Fermilab.

Springtime in Batavia means sunshine, blooming flowers and — at Fermilab — the arrival of adorable bison calves.

This is a yearly ritual for these herds of purebred bison and this year the federal lab will welcome between 10-14 new calves. The bison were first brought on the property in 1969 by Fermilab’s first director, Robert Wilson, who grew up in Wyoming and missed the sight of life on the frontier.

On April 18, the first two calves were born and started the birthing season, followed by four more over the next five days.

There are currently 17 full grown bison and one yearling from last year. The new and expected calves will not call Fermilab a permanent home, but they will grow with the help of their mother until the time comes to be sold.

Cleo Garcia has worked as the groundskeeper and bison herder at Fermilab for the past 14 years. “I am not an office guy, I really like being outdoors and being around the bison really makes you feel like you’re out in the open,” Garcia said.

He explained that the labor and birth takes about 3-4 hours on average from start to finish. Once born, they are not disturbed and left to be cared for by the mother unless a problem arises.

“They’re still wild, even though we have them inside of fencing. We give them respect,” Garcia said. 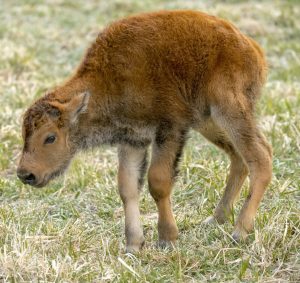 A newborn bison at Fermilab stretches its legs. The baby is among up to 14 expected to arrive this spring. (Fermilab photo)

They are free to roam on 80 acres of land, providing a look into what life in Illinois was like before the bison population declined. Garcia finds comfort in the fact that they “aren’t pinned down in a small area” but instead able to move around happily.

The bison have since become an attraction between locals and visitors alike. Even employees at Fermilab wander near the fence to look on at them during lunch breaks. The company Instagram account, with over 10k followers, shares updates of the new additions to the herd with those who can’t visit, creating fans far beyond Batavia.

Visitors can view and photograph the new calves daily from 8 a.m. to 8 p.m. Admission is free but a valid photo ID is needed to enter the site.

To learn more about the calves and other happenings at Fermilab, check them out on Facebook (Facebook.com/Fermilab) and Instagram (@Fermilab).