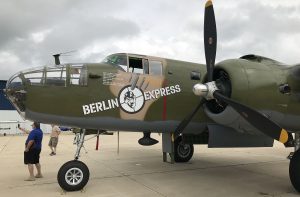 A restored World War II B-25 bomber includes an image of Adolph Hitler in the crosshairs below the cockpit. (Photo by Jack McCarthy / Chronicle Media)

The World War II bomber parked near a Chicago area airport runway looked like it just flew straight out of 1944.

Still airworthy after nearly 80 years, the task for this restored B-25 Mitchell Bomber was to fly guests over suburban Kane County and preview more flights to come this week as the Experimental Aircraft Association hosted an air show in Oshkosh, Wisconsin for the first time in two years.

The EAA’s AirVenture 2021 runs a full week through Aug. 1 in a comeback following a COVID-19 cancellation in 2020.

The EAA-sponsored visit to Aurora Municipal Airport was designed to drum up interest for an aviation show that dates back to 1953 while also proudly show off a working piece of vintage equipment.

Funds raised from flights help keep the B-25 in flying condition and “not behind a rope in a museum,” said EAA volunteer Mike Hastings.

Tim Bourgoine, a volunteer crew chief, said the B-25 operates under special permission granted by the Federal Aviation Administration. 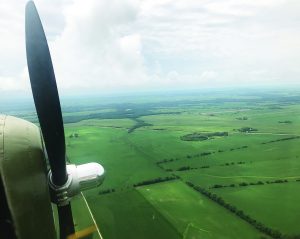 A patchwork quilt of corn and soybean fields can be viewed from above as a vintage B-25 flew over southwestern Kane County in a flight promoting a Wisconsin air show. (Photo by Jack McCarthy / Chronicle Media)

“They’ve given us a special exemption to give these kind of rides so people can experience a bit of history, a bit of what World War II was like,” he said.

“Along with that comes very specific guidelines as far as maintenance, inspection of the aircraft, training for mechanics, training for pilots, and so forth. It allows us to keep the aircraft in as safe a condition as possible.”

Conditions were warm and overcast as the B-25 took off following a 45-minute delay awaiting optimal conditions.

When airborne, the bomber smoothly conducted a 20-minute circuitous route over southwestern Kane County, offering a view of suburbs, small towns and a rural patchwork quilt of corn and soybean fields.

The B-25 — named for air power advocate Army Gen. Billy Mitchell — is described as a twin-engine and twin-tail bomber and was used by every branch of the U.S. military as well as other nations. 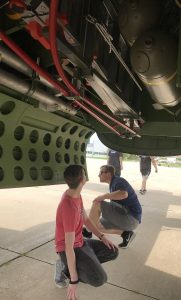 Two visitors get an up-close look at a bomber bay of a restored B-25 World War II era bomber during a visit to the Aurora Municipal Airport in Sugar Grove. (Photo by Jack McCarthy / Chronicle Media)

The propeller-driven, nearly all-hydraulic craft was not designed for passengers and the only concession to the 21st century are digital gauges and sensors on the cockpit control panel.

The aircraft — one of nearly 10,000 produced — measures 53 feet in length with a 68-foot wingspan. The narrow fuselage had to accommodate several machine-gun ports as well as a bomb bay that could handle a 2,400-pound load. 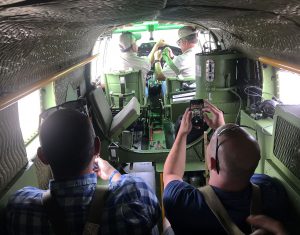 The fuselage is thin and the cockpit cramped in a World War II aircraft designed to do one thing: drop bombs on enemy positions. (Photo by Jack McCarthy / Chronicle Media)

“It was not certified for passengers,” said Bourgoine. “It was designed to drop bombs and strafe runways and railroads and whatever they could.”

Although the craft featured a cartoon image of German Fuhrer Adolph Hitler and dubbed “Berlin Express,” it did not participate in wartime combat.

Instead it served as an administrative aircraft in three western states and later as a trainer.

It was converted into a private executive plane after the war and later saw action on the silver screen with two roles in the 1970 movie “Catch-22.”

EAA acquired the plane in 1972 and volunteers began restoration into its current form beginning in 1975.

AirVenture 2021 is held on the sprawling EAA site on the south side of Oskhosh, located approximately 88 miles northwest of Milwaukee.

A variety of ticket options — including single and multiple day admissions — are available for the event, which includes air shows, aircraft exhibits, forums and workshops and flights. Gates open daily at 7 a.m.