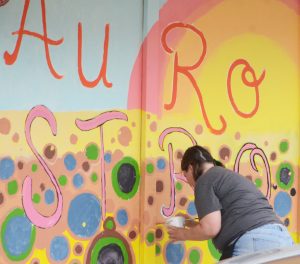 “Aurora Strong” was the message last Thursday as a volunteer paints on a boarded-up storefront in downtown Aurora. Cleanup and beautification is being coordinated by Aurora’s Public Arts Office after properties were damaged in rioting and looting. (Photo by Al Benson)

Aurora’s night of rage gave way to a hopeful morning last week as volunteers descended on downtown to clean up and recover some of what was lost.

Businesses owners, families and friends, students and even political activists picked up brooms and shovels to sweep up broken glass and board up windows on Monday, June 1 after a peaceful protest rally turned into a violent wave of vandalism and looting the previous night.

“If you drive through Aurora downtown or watch on social media you see true Aurorans at work and demonstrating what it means to be Aurora Strong,” said Mayor Richard C. Irvin. “Some began at the break of dawn to help us restore Aurora from the devastation.”

Damage was extensive. An early estimate put cumulative losses at around $3 million.

Fire gutted a Dollar Store. A bank office in a building being rehabilitated was nearly set ablaze. Other small businesses like a convenience store, a martial arts studio, a beauty salon and smoke shop all suffered losses ranging from broken windows to looting. 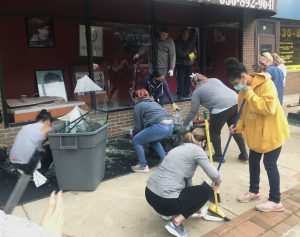 A group of volunteers concentrate on cleaning up glass in front of a storefront on Broadway Ave. in downtown Aurora on Monday, June 1. (Photo by Jack McCarthy / Chronicle Media)

A few blocks away, a mobile phone store and nearby electronics outlet were also damaged.

Many volunteers simply showed up to help.

“It was organic,” said a city spokesman.

“We have over 300 businesses downtown, and these are small businesses,” said Marissa Amoni, manager of Downtown Aurora, an organization of property owners. “They live in our community, they have families, they have children. We are a very strong community.”

Donations of doughnuts and drinks quickly followed and when piles of plywood arrived, windows were quickly boarded up.

Over the next two days, the now-secure storefronts turned into a canvas for artists offering colorful pieces and hopeful messages.

“Hundreds came out to assist in cleanup efforts,” according to Downtown Aurora’s official blog. “In a matter of a few hours, graffiti was washed off, broken windows were boarded up, litter was picked up, and a downtown that was crying the night before was re-energized by its community.” 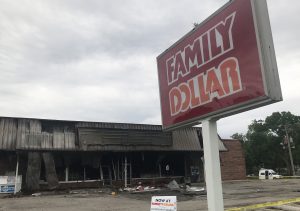 A Family Dollar Store was gutted by an fire set during a May 31 rampage through downtown Aurora and environs. (Photo by Jack McCarthy / Chronicle Media)

The cleanup followed an unprecedented wave of vandalism that broke out after a peaceful protest rally on Sunday, May 31 turned into a violent rampage.

An estimated 800 protesters gathered at the Aurora Police headquarters to protest the death of George Floyd, an African-American man in Minneapolis who died while in custody of white police officers. They also offered broader objections to the historic treatment of minorities by law enforcement, themes running through scores of similar gatherings around the region and country.

“Any officer who thinks that (what happened to George Floyd) is OK needs to turn in their badge,” Police Chief Kristen Ziman said to protesters. “And I stand by that.”

Then it all went south.

“We hosted a peaceful protest at the Aurora Police Department,” said Irvin. “Once the protest ended and marchers began to take to the streets, the protest was hijacked by others and turned into a destructive night of vandalism, looting and terror. What I don’t understand is how the numbers grew significantly with people from outside Aurora using strategic methods to stir discord and encourage mass confusion and crime.”

One day after looters wreaked havoc on businesses and stores downtown and elsewhere in Chicago, it was now Aurora’s turn. Some tried to march to the Outlet Mall on Aurora’s northern fringe but were stopped.

Others proceeded downtown. By then the crowd was estimated at up to 1,200 persons, many who then engaged in “widespread incidents of violence, vandalism and stealing throughout the area,” Irvin said.

Police attempting to secure downtown were targets of bricks, glass, rocks and — in at least two instances — gunshots. One officer was injured while three squad cars were set on fire.

Irvin declared a state of emergency and slapped an overnight curfew on the city, which was extended three times to cover the full week. Entry into Aurora from Interstate 88 was blocked for several nights and residents were asked to stay a home or work during the timeframe.