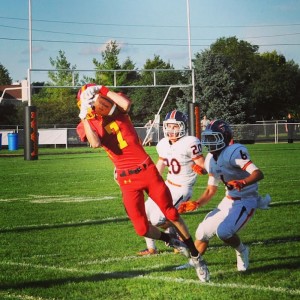 Batavia High School rarely conducts live tackle practices, according to coach Dennis Prion, who also is a member of the Illinois Advisory Council on Player Safety. He and other coaches say the prep football game is doing all it can to make student athletes safe. (Photo: Batavia High School)

Batavia has never been a football program that did a lot of hard hitting during practice the week leading up to games, so the Illinois High School Association’s new limits on full live contact practice time did little to affect the Bulldogs.

It’s something that Batavia coach Dennis Piron, who is a member of the Illinois Advisory Council on Player Safety, has always practiced.

“We don’t live tackle in practice really ever,” Piron said. “Even with (former head coach Mike Gaspari) we felt that way. We spend a lot of time on drills and pursuit, conditioning and fitness, less time worrying about contact. Really, the rules you see in place were already there. It’s not a big deal.”

Most of the coaches across the state that Piron spoke with since joining the advisory committee echoed those sentiments. The IHSA put a definitive plan on paper, but the vast majority of football programs in the state were already operating in that fashion.

“It won’t be a tremendous amount of change from what we’ve been doing the past few years,” Marian Central coach Michael Maloney said. “We just have to be a little more cognizant of the time period that we dedicate to live action to ensure we are in compliance with the policy. Very little will change at all.”

The impetus of the IHSA initiative is the increase in awareness of the dangers and prevention of concussions. This initiative is another step toward making football at the IHSA level as safe as possible for student athletes.

“I think the way the IHSA is trying to get out in front of the issues is commendable.” St. Rita coach Todd Kuska said. “I believe the IHSA has done an excellent job of addressing the issue of concussions. Our players’ safety must always be our number one priority.”

Despite all of the efforts football is making to limit, prevent and properly treat concussions, the fact remains that football can still be a violent sport.

“I believe the intent is in good spirit,” Maloney said. “The IHSA can only do so much. Ultimately, it falls on us as professional coaches to make the critical decision necessary to improve safety and efficiency without sacrificing the quality of the product on the field. Part of what makes football great is the violence and the exciting collisions. We cannot change the game or it ceases to be the game we have such a passion for.”

While that is the case, the sport is trying its best to make it as safe as possible.

“We have to make sports for kids as safe as possible,” Piron said. “You have to balance the risk with the tremendous benefit that sports have for kids. Football as a sport today has never been in a better place. It’s never been safer, better run, better coached. Parents can feel comfortable that their kids are safe playing the sport.”

Football coaches are hoping that the emphasis on concussions in their sport inspires some movement in other sports, particularly cheerleading, hockey and soccer, in which concussions are also a growing problem.

“Many other sports need to get on the train and evaluate their best practices or the IHSA needs to bring other sports along and be careful about making the sport of football the poster child of concussions,” Geneva coach Rob Wicinski said. “It is the high school sports response, not the football response, to this injury.”