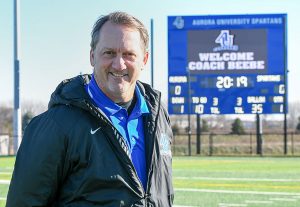 Aurora University not only moved swiftly to find a new head football coach, it also got a legend in the process.

Just days after dismissing Rick Ponx and most of his staff, AU announced the hiring of Don Beebe, a 53-year-old Aurora area native who had a successful nine-year NFL career — including six Super Bowl appearances — and then returned to open a private training center and coach at Aurora Christian High School.

“I am honored to coach AU football, drawing on my NFL, coaching and training experience and bringing it home where my roots are, where I was born and raised my family and I still live,” Beebe said in a statement.

He quickly established a new baseline for AU football.

“I care about my players and want to instill in them the importance of never settling for mediocrity,” Beebe said. “I want our Spartan football players to think big. With hard work and commitment they can and will achieve great things.”

The school’s statement said Beebe was highly regarded by coaches, players and fans for his strong character, robust work ethic and perseverance.

“Bringing in Don Beebe raises the ceiling quite a bit for recruiting and leading our drive to win conference championships and compete on a national level,” said Jim Hamad, director of athletics. “(But) it is Don’s mentorship on and off the field that gives us the most excitement. Don has led a life of character and integrity and we are confident our students will respond to his guidance. I think the future is brighter than ever for AU Athletics.”

An NFL wide receiver for nine seasons, Beebe made six Super Bowl appearances and won a championship. He was the first NFL player to take the field in NFL title games — four with the Buffalo Bills and two with the Green Bay Packers, one of which they won.

After retiring from the NFL, Beebe founded House of Speed in Aurora, which specializes in training athletes to perform better by enhancing speed and character.

He also coached Aurora Christian High School to two state football championships in 2011 and 2012. His 2018 Eagles went 8-4 and reached the Class 1A quarterfinals before falling to Lena-Winslow.

Beebe grew up in Sugar Grove, and graduated from Kaneland High School and went on to attend AU played Spartan basketball for one season.

While playing football at Chadron State College in western Nebraska, his speed caught the eye of NFL scouts. He was invited to NFL combine trials in Indianapolis in 1989 where he and Deion Sanders ran the 40-yard dash in a record-setting 4.25 seconds. Beebe was the Buffalo Bills’ first pick in the draft.

He holds numerous records, including the Bills record for most touchdowns in a game (four). Buffalo Bills coach Marv Levy said Beebe “showed what a fighting heart is all about. He gave everything he had all of the time.”

Beebe is a sought-after motivational speaker and in 2012 published a memoir, “Six Rings from Nowhere” chronicling his journey from construction worker to NFL record holder.

His son, Chad, is a wide receiver with the Minnesota Vikings. Two of his three daughters play volleyball (one in high school, one in college) and his third daughter recently gave birth to Beebe’s first grandchild.

He is involved in several charitable organizations, including Make-A-Wish Foundation, Fellowship of Christian Athletes, Athletes in Action and the Cystic Fibrosis Foundation.

Ponx was dismissed on Nov. 12 following a 5-5 season, including a 5-2 Northern Athletics College Conference record. He went 10-20 through five AU seasons, including a 2016 NACC title.

AU apparently did not make an official announcement about the firing of Ponx. The news came instead via local media reports. The school did put out a nearly 800-word press release on Beebe’s hiring.

Bringing Beebe aboard drew positive reaction on social media, although one Facebook user grumbled that Ponx got a “raw deal.”